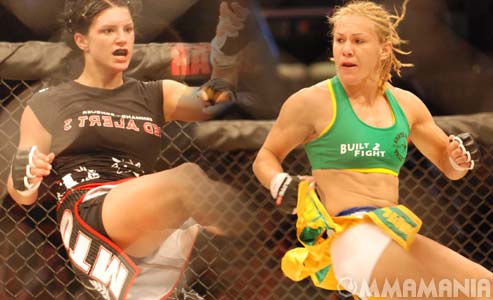 "Cyborg," the wife of former Pride FC fighter Evangelista "Cyborg" Santos, burst onto the scene in May of 2008 with a dominating performance against Shayna Baszler in her debut under the Elite XC banner. Like her husband, she’s a product of the Brazilian Chute Boxe Academy, a style that’s evident as soon as she steps foot in the cage.

Her most recent fight was on the Strikeforce: 'Shamrock vs. Diaz' card last April when she received heavy criticism for missing weight for her fight against Japanese import Hitomi Akano. Santos brutalized "Girlfight Monster" for two rounds before stopping her with strikes in the final frame.

Since the fall of Elite XC immediately following Elite XC: "Heat" in 2008, Santos has been clear on the fact that she wanted to fight Carano, the face of women’s MMA and one-time Elite XC headliner.

And "Conviction" is more than happy to oblige.

The only obstacle preventing the blockbuster fight from happening, however, was the confusion still left over from the Pro Elite fighter contracts. Now that Strikeforce has secured Carano after finally acquiring her contract in the Pro Elite sale, the eventual superfight is set now to go down on August 15.

The female American Gladiator has been on the sidelines ever since her thrashing of Kelly Kobald at 'Heat' back in October 2008. A victory over the dangerous Santos would undoubtedly cement her status as one of the world's top female fighters.

Stay tuned to MMAmania.com for more information on Strikeforce August 15 card as it continues to come together.