Share All sharing options for: Kimbo Slice signs with the UFC as a participant on The Ultimate Fighter (TUF) 10 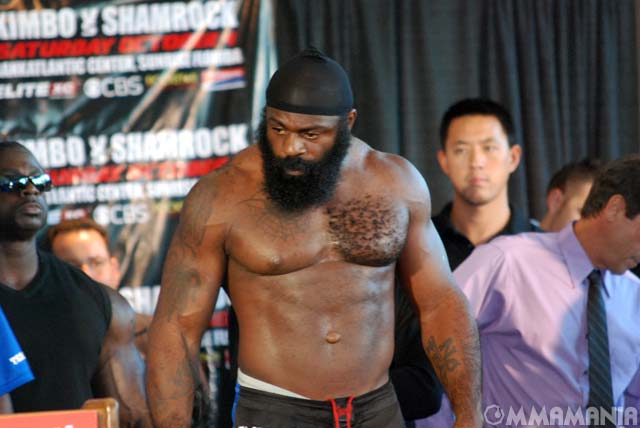 I guess Kevin Ferguson really wants to be an F-ing fighter after all.

"Kimbo Slice" has apparently inked a deal with the Ultimate Fighting Championship (UFC) and will debut as a participant on the upcoming tenth season of The Ultimate Fighter (TUF) according to Yahoo Sports.

While there was some initial interest in his services, it was unrealistic to think they would pay him $500,000 (what he got paid for the Petruzelli fight) to bang with middle-of-the-road competition. In the end, the two sides could not find a common ground financially, and Slice officially became a free agent.

Anyone who would have predicted he'd end up on the Zuffa payroll would have gotten a visit from men in white coats at 3am for a long ride in the paddywagon -- especially after all the disparaging remarks UFC President Dana White has made regarding the former street fighter and YouTube sensation.

However under all the insults and potshots, one thing White did promise was that Slice could join the UFC ranks if he fought his way into the cage via a stint on The Ultimate Fighter, White's proving ground for up-and-coming talent looking to make it big.

Here's a snip from the prez during the UFC 90 post-fight presser:

"What has the guy done to deserve to be in the UFC? Nothing. I don’t consider him a real athlete or anything. He won’t win The Ultimate Fighter (TUF). The offer is out there if he wants to take it and he won’t win it. I might [put a heavyweight show together just for him]."

I guess Ferguson took that as a challenge, as the bearded bruiser is now set to debut on the Spike TV reality show on September 16.

Slice made his mark on the entertainment world by knocking out cans in Miami backyards. By airing the footage on YouTube.com, he became an overnight celebrity and was taken under the wing of promoter Gary Shaw.

He also enlisted the help of legendary mixed martial artist Bas Rutten as his head trainer and began training consistently for more than two years (Rutten and Ferguson have since parted ways). Kimbo's first loss to Seth Petruzelli at Elite XC 'Heat' last October on National television quickly ended the Kimbo phenomenon and was likely the final nail in the coffin of Pro Elite.

It will be interesting to see how he responds in an environment full of hungry up-and-comers -- as well as to coaches Quinton "Rampage" Jackson and "Sugar" Rashad Evans, who will steer this ship come September.

The Ultimate Fighter 10 has been full of surprises. First Evans, then Jackson and now Ferguson. I guess we best prepare ourselves for some black on black (on black) crime.