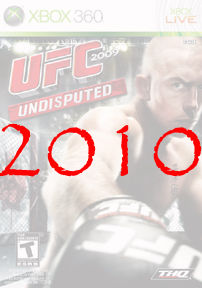 UFC President Dana White took the stage at the 2009 Video Game Awards (VGA) airing on Spike TV last Thursday, May 28 at 11PM ET for one of his patented ’special announcements.’

With UFC 98: "Evans vs. Machida" officially in the books and the upcoming season of The Ultimate Fighter (TUF) right around the corner (which not coincidentally airs on Spike TV), one of the going rumors was the official announcement of next season's coaches.

White dropped a similar bomb in a cameo at the 2007 VGA’s, confirming a rumor that Forrest Griffin and Quinton Jackson would go mano-y-mano on season seven.

Instead, White kept with the video game theme and informed viewers that THQ would be releasing 'UFC Undisputed 2010,' a sequel to the immensely popular '2009' version that hit shelves earlier this month to the delight of fans and gamers worldwide.

‘UFC Undisputed 2009′ was the first video game for the promotion since Ultimate Fighting Championship: "Sudden Impact" back in 2004 — five very long years. Fortunately for fans it won't take nearly as long for the sequel.

For those of you who purchased your copy and have been playing consistently, now is the time to sound off: What changes or improvements would you like to see for 2010?

Let your voice be heard!