Fedor Emelianenko vs Josh Barnett confirmed for Affliction 3 on Aug. 1

Share All sharing options for: Fedor Emelianenko vs Josh Barnett confirmed for Affliction 3 on Aug. 1 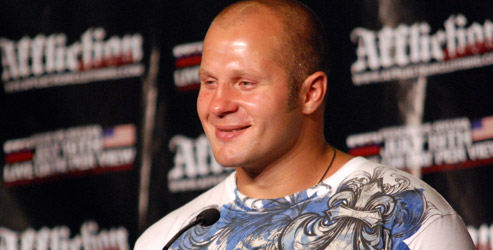 Short and sweet language spoken by Affliction Vice President Tom Atencio earlier today when he confirmed with MMAmania.com that his heavyweight champion, Fedor Emelianenko (30-1-1), will defend his title once again when he faces another former UFC champion and top world-ranked talent, Josh Barnett (24-5).

The long-awaited heavyweight fight will finally happen at Affliction’s third venture, which is set to go down at the Honda Center in Los Angeles, Calif., on Aug. 1, 2009.

There has been a lot of talk over the years that both fighters were avoiding meeting in the center of the ring because of the friendship that the pair forged during their years fighting overseas under the Pride FC banner. It appears, however, that the showdown was inevitable -- they are the last two men standing under the Affliction banner atop their respective division.

Emelianenko is coming off his dramatic win against Andrei Arlovski at Affliction’s second show – Day of Reckoning. The "Russian Cyborg" looked almost human for the first minute and a half as "The Pitbull" peppered him at will with his sound boxing skills.

That all ended in a sudden thud, however, when the Belarusian got a little too aggressive and attempted a flying knee, which Emelianenko countered with overhand right to the chin that put Arlovski out for the count.

As for Barnett, he last competed against Gilbert Yvel at "Day of Reckoning" on the same card as Emelianenko vs. Arlovski. While his win was mostly one sided, Barnett was visibly tired half-way through the fight and was repeatedly ineffective until the he was able to finish the fight via submission (strikes) in the third and final round.

It was not the kind of performance that will likely give Barnett fans much confidence going into his fight with Emelianenko. Regardless, his match up with Emelianenko is years in the making, which could make Affliction 3 the most successful (and memorable) event for the promotion to date.

In other Affliction 3 news, Atencio confirmed the fight card will feature a fight between Gegard Mousasi and Vitor Belfort; however, Belfort’s contract is not yet finalized. Nonetheless, assuming the I’s are dotted and the T’s are crossed, the fight has been green lit by Atencio.

Here is the current rumored/confirmed line up for Affliction 3:

*pending contracts being signed by Belfort, Daley, and Horodecki.

That’s it for now. Look for more fights to be added as we get closer to Aug. 1. For more on Affliction click here.