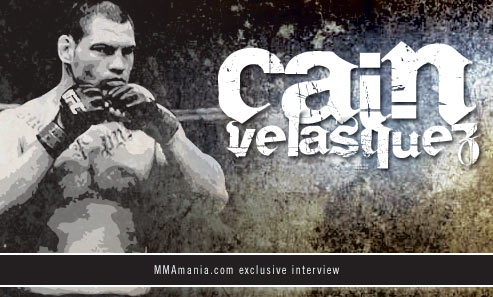 Highly-touted heavyweight prospect Cain Velasquez was all set to face the toughest test of his young career, preparing to collide with grizzled MMA veteran, Heath Herring, in the co-main event at UFC 99: "The Comeback" on June 13.

But a funny thing happened on the way to the Lanxess Arena in Cologne, Germany: "The Texas Crazy Horse" pulled up lame, forcing the promotion -- and Velasquez -- to switch gears on the fly and plug-in a formidable opponent capable of finding out what the wrestling powerhouse from Arizona State University is truly made of.

"The French Sensation" is coming off a second round technical knockout victory over Antoni Hardonk at UFC 97 just last month. He has won his last three fights since losing a split decision to the aforementioned Herring. His confidence has more than likely never been higher.

Talk about a tall (and rather imposing) order ... and he has just three weeks to try and figure out how to fill it.

We had the chance to briefly catch up with the soft-spoken Velaquez between training sessions earlier today. He talked to us about his new opponent, the Lesnar-Mir fight, the addition of Mirko "Cro Cop" to the fight card and much more.

Brian Oswald (MMAMania.com): The big news this week was that Heath Herring had to pull out of your UFC 99 fight. The UFC replaced Heath Herring with Cheick Kongo. How do you feel about your new opponent and will it change your strategy with little more than three weeks to go?

Cain Velazquez: I feel good about my new opponent. At this stage, I think he is a tougher opponent. I thought he was in line for a title shot next so that makes me feel good. I will definitely have to change up my gameplan now.

He has a long reach and is very strong fighter. He has improved his take down defense. I will be really focused on my take downs and also working to sharpen my kickboxing skills. Overall, I want to be fast, explosive and just stay calm out there.

Brian Oswald (MMAMania.com): Cheick Kongo is known for his aggressive stand up game. Kongo is also known for having a suspect ground game. Will you exploit this right away and look to take Kongo to the ground or will you stand and trade with him to start the fight?

Cain Velazquez: We will see how the fight goes. I will start with a stand up fight and see how that goes. The fight will end up on the ground if it needs to. His defense has gotten a lot better but I am a phenomenal wrestler. I am going to make Kongo work for everything in this fight.

Brian Oswald (MMAMania.com): There's a rumor floating around that Kongo was promised the first shot at the winner of the UFC 100 title unification bout between Brock Lesnar and Frank Mir if he can get past you June 13. If you beat Kongo, do you feel that puts you in line for a title shot over guys like Shane Carwin or the Randy Couture-Antonio Noguiera winner?

Cain Velazquez: I don’t think about that. I just have to go out there and win this fight. Whatever the UFC decides to do with the next title contender is their call. That being said, if they ask me, I will definitely be ready for my title shot.

Brian Oswald (MMAMania.com): Dana White has confirmed Croatian heavyweight superstar, Mirko "Cro Cop," will make his Octagon return on the same UFC 99 fight card against Mustapha Al-Turk. Would you have rather fought a legend in the sport like Cro Cop or do you prefer a surging superstar like Cheick Kongo?

Cain Velazquez: I think Cheick is the perfect opponent for me right now. He is surging -- he is at the top of his game right now. He has a three game winning streak going into this fight. I think adding Cro Cop made that fight card that much more exciting though.

Brian Oswald (MMAMania.com): How is your training coming along? What is your workout regimen like with little more than three weeks to go before your big UFC 99 fight?

Cain Velazquez: It is going good. I am doing three a days. I lift in the morning. I have training during the day and also night training. I add in a run between those work outs. Training is going good -- I am working real hard right now. About a week before the fight I will slow things down and go into rest mode. It will basically be the week I am out in Germany.

Brian Oswald (MMAMania.com): Are you going to predict a winner for Lesnar vs. Mir. And do you have a preference as to who you fight?

Cain Velazquez: I honestly think it is a toss up. Frank Mir has beat Lesnar once. And he looked very sharp against Nogueira. Brock is still new to the sport but he is spending so much time in the gym. He has obviously gotten better. I think it will it be an exciting fight. I really can’t predict a winner yet.

As far as whom I fight, I will fight either one.

Brian Oswald (MMAMania.com): Thanks for stepping away from your training to speak with us. We look forward to your fight with Cheick Kongo at UFC 99.

Brian Oswald is an associate editor for Inside Fights, as well as a syndicated writer to Fox Sports. Look for future exclusive articles from him on MMAmania.com