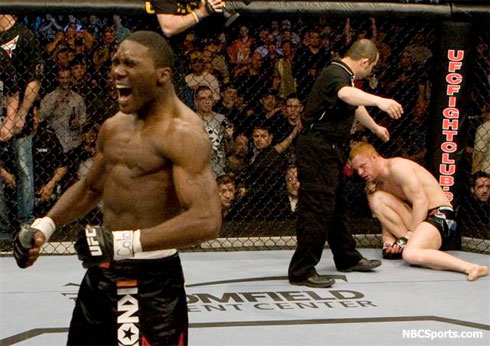 Surging UFC welterweight standout Anthony Johnson (7-2) has been forced to withdraw from his upcoming 170-pound showdown against Matt Brown (9-7) because of a "severe" knee injury sustained while training, according to FiveOuncesOfPain.com.

No replacement for the hard-hitting "Rumble" is known at this time. But we can likely expect an announcement to come sooner rather than later with The Ultimate Fighter (TUF) 9 Finale at "The Pearl" at the Palms Resort in Las Vegas, Nevada, scheduled for June 20, which is about five weeks from today.

Johnson most recently avenged his controversial loss to Kevin Burns at UFC Fight Night 14 last December, knocking the Iowan senseless with a brutal head kick in the opening seconds of round three. He followed that up with a first round destruction of Luigi Fioravanti at UFC Fight Night 17 back in February.

The 24-year-old Atlanta, Ga., native has a ton of buzz because of his size, power and fight-finishing ability. He appears to get better each time out, training with Strikeforce champions Cung Le and Josh Thomson.

His road to the upper echelon of 170-pound fighters, however, will now be put on indefinite pause until he can recover from this latest setback.

Diego Sanchez is expected to headline TUF 9 Finale in a lightweight match against Clay Guida, and Joe Stevenson and Nate Diaz are also booked to tangle in another fantastic 155-pound showdown.

The lightweight and welterweight finales from this season of TUF, which is currently in progress with coach Dan Henderson leading a U.S. team against coach Michael Bisping and his British squad, will also be featured on the televised Spike TV main card on June 20.