Share All sharing options for: Shawn Tompkins doesn't have time for 'Brazilian time' -- even for Wanderlei Silva 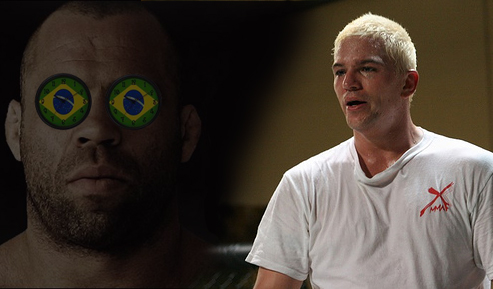 "We worked together before, we worked together for the Keith Jardine fight. We're great friends, I think we just have different ideas on what a training schedule should be. People have brought it up before. There's the 'Brazilian time' and I don't have time for 'Brazilian time.' I train 28 of the best athletes in the world here in Las Vegas. We had a few conflicts at the beginning of camp and I decided it was best if he got a different trainer and I moved on to some other guys."

Xtreme Couture trainer Shawn Tompkins reveals that Wanderlei Silva was inconsistent in his training times and that the difficulty of trying to find a cohesive schedule led to his departure as "The Axe Murderer's" trainer for the upcoming main event between Wandy and Rich Franklin at UFC 99 on June 13. Tompkins also mentions that it has been brought up before. Could Silva's recent shortcomings inside the cage be blamed on an inconsistent training schedule? Or does Tompkins need a refresher course in 'Brazilian Time?' I think we might get our answer on June 13.