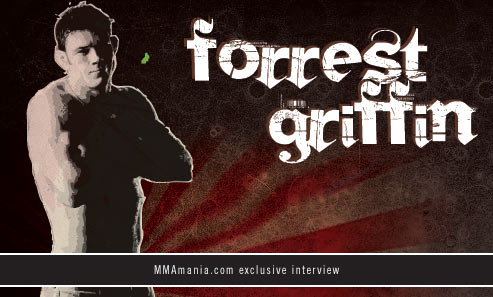 When fans talk about the overnight success of the UFC, most of the time the first name mentioned is that of Chuck Liddell.

And while "The Iceman" is indeed responsible for taking pay-per-view buys into uncharted territory, it is his television counterpart that helped transform mixed martial arts into an acceptable form of mainstream entertainment.

If Chuck Liddell was the manifesto, then Forrest Griffin was the revolution itself.

Live on Spike TV, in front of an audience that no one was quite sure they would ever capture again, Griffin polarized the causal fan with a gritty performance opposite Stephan Bonnar in the finale of The Ultimate Fighter (TUF) that may go down as the greatest mixed martial arts fight ever featured on live television.

And to the victor belong the spoils.

Griffin would eventually legitimize not only himself, but also the TUF farm system by capturing the light heavyweight title from Quinton Jackson at UFC 86. He may have subsequently surrendered that title to another TUF grad, Rashad Evans at UFC 92, but he will never surrender his legacy in the evolution of the UFC.

Now, after spending most of the year sidelined with a broken hand he suffered back in January, Griffin is poised to return at UFC 101 on August 8, against mixed martial arts' deadliest warrior: Anderson "The Spider" Silva.

Griffin was called to duty to succeed where others have failed. His mission is not just to dethrone the Brazilian juggernaut, but to force him to engage, and prove himself worthy of the championship title.

We know why, now find out how, in our exclusive interview with Forrest Griffin.

Brian Oswald (MMAmania.com): You were all set to take on a tough opponent in Thiago Silva and he seemed like an ideal match-up for you coming off the hand injury. Why did you decide to fight Anderson Silva instead?

Forrest Griffin: I didn’t feel I was as mentally tough as I should have been preparing for the fight. I wanted to really test myself. You see a lot of guys fight Anderson and they just don’t look like themselves. They don’t look like they want to be there or look like they have any confidence. I want to at least come in and fight up to my ability. So this fight will either bring out the best in me … or I will have to go out and find a real job.

Brian Oswald (MMAmania.com): It seemed like everything happened so fast. Can you tell us exactly how the UFC pulled off the ol' Silva switch-a-roo?

Forrest Griffin: Nope, I have no idea. They came to me and said, ‘Hey Forrest; you want to fight a different Silva’ and I said 'Sure.' We were doing a photo shoot for something, for what I'm not sure, and you-know-who came over and said, ‘Hey I gotta talk to you’ and I said ‘What, I didn’t do anything wrong.’ This ain’t rocket science, if they ask me to fight someone, I'll fight someone.

Brian Oswald (MMAmania.com): Do you see this fight with Silva as a shortcut toward getting back into a title fight or is it just one high-profile fight at a time for you?

Forrest Griffin: Yeah, I don’t know man. I'm not really worried about all that. I'm just focused on dealing with this dude. I just want to show up prepared and actually fight the guy. I just don’t think anyone has actually tried to fight him up to their ability.

He's made a lot of guys feel stupid. It’s when guys get hit, and then they can’t hit him back; they just look hopeless … like they almost want the fight to be over.

Brian Oswald (MMAmania.com): Anderson Silva is considered a lethal striker but can he really hit you any harder than Quinton Jackson and Rashad Evans already have?

Forrest Griffin: (Laughing) You know, a lot of guys have hit me real hard. The thing about Silva is that he's going to hit me a lot quicker. He's got a great reach, he actually has the same reach I do and I am not going to be much bigger.

Brian Oswald (MMAmania.com): Well you’re considered a pretty strapping young man. Are you saying your size is not really going to play an advantage for you this time?

Forrest Griffin: I normally step into the Octagon at around 220. Now that I think about it, I wouldn’t mind if Silva and I fought this fight at a catchweight of 215. I would come in at 225, which would be beautiful for me. When I'm fat, the first ten pounds are what can slow me down but the next ten pounds I really don’t need to lose; it’s just to make weight. I could actually function better with it. When I start my weight cut, I feel good, I feel faster but you only need to shed so much fat. Honestly, where the sport is heading, we could have a weight class every ten pounds.

Brian Oswald (MMAmania.com): Do you think that is where we’re heading as the sport grows and we get more and more athletic guys competing?

Forrest Griffin: Yeah I do, but I don’t see them adding any new weight classes for at least five years. The adding of weight classes should parallel and keep pace with the continuing growth of the sport. With the heavyweight division there is not a need for creating a super heavyweight division yet. There might be six guys that would compete there.

But if it weren’t for the NFL and NBA we’d have ten more weight classes. If you’re athletic enough and you’re over 200 pounds, you’re either playing college football or basketball. Talent goes where the money is. It’s as simple as that. That’s why I got into the sport. I was like, ‘Hey I could do this.’

Brian Oswald (MMAmania.com): So are you saying you beat the talent to the punch in terms of you getting into MMA?

Forrest Griffin: Hell yeah. In five years, I don’t know that I'll be able to compete at the level I do now. That’s just a legitimate statement. The guys competing are just getting so good and they keep coming. All these freaking wrestlers are coming out of the woodwork. They're great and it’s really unfair you know. I can’t wrestle; I haven't wrestled my whole life. I don’t remember what I was doing but I wasn’t wrestling, that’s for sure.

Brian Oswald (MMAmania.com): Anderson Silva decided to also call out Fedor Emelianenko in a recent interview. Do you have any intentions of calling out Fedor or Brock Lesnar for that matter?

Forrest Griffin: He said he wants to fight Fedor? Well I'll help ease him into that heavier weight class if that's where he wants go. Like I said earlier, let’s go ahead and make this fight at 215. That would suite me just fine.

Brian Oswald (MMAmania.com): Submission, T(KO), or a decision win. What’s your best bet for scoring a victory in this fight?

Forrest Griffin: I will come up with a game plan. I need to score some takedowns while avoiding any guillotine. Silva has got those long limbs. I go back to Silva being a southpaw. Also, his quickness and the unexpectedness of his style are on my mind. I have never fought a southpaw that I struck with before.

I don’t like the idea of fighting a southpaw, it’s weird. And his clinch work, he is just so relaxed when doing it. Other than that I'm not too worried about the fight; it’s only going to be 15 minutes so what’s the worst that can happen?

Brian Oswald (MMAmania.com): How is your surgically repaired hand doing?

Brian Oswald (MMAmania.com): What are your thoughts on the Lyoto Machida-Rashad Evans title fight?

Forrest Griffin: It could start out real slow since they both have a tendency to counter fight. So it could end up being a boring fight to some or it could end up being a very exciting fight. At this level, with the competition, you make one mistake, you get clipped, and your night's over. It’s unfortunate but it is what it is.

Brian Oswald (MMAmania.com): Hindsight is always 20-20. What could you have done differently in your fight with Rashad Evans to come away victorious, especially since you were winning the fight up until that point?

Forrest Griffin: Obviously the body kick was not a good idea (laughing). With the body kick, I didn’t get my feet back down and so I didn’t get a punch in. And not getting punched in the face when you’re off balance and looking up with your head wobbling around.

And not get hit a bunch on the ground either. Also, you can’t rest. With the round almost over, I thought I might chill for a second. I just can’t chill with my opponent punching me in the face. It was what it was though. Obviously I can beat Rashad, so I look forward to a rematch with him; with Jackson too.

Brian Oswald (MMAmania.com): Well speaking of Rampage, he was pretty vocal about fighting you again. After his win over Wanderlei, he said he was willing to wait on a title fight and rematch you first.

Forrest Griffin: I’ve never even heard that before. As far as Jackson, I have never seen a guy so mad over having a bad night. It’s not like I had the best night either. I am not sure if he feels the need to be mad at me over that but its whatever. Yeah, I would fight that guy again.

Brian Oswald (MMAmania.com): I just got my hands on a copy of your new book, "Got Fight?" Did you enjoy the process of writing your book or was it a pain in the ass?

Forrest Griffin: You really have a copy of it? Wow, so they turned that into a real book. I thought they were pulling the plug on it. I actually had a lot of fun getting the book done; it was awesome. All I had to do was call the guy up and scream about how much I hate stuff and I guess he recorded it and now it’s a book.

Brian Oswald (MMAmania.com): My first UFC PPV was UFC 12, watching Randy Couture take it to a young Vitor Belfort -- and he's been one of my MMA idols every since. Is he as cool as I think he is? And what is it like training with him at Xtreme Couture?

Forrest Griffin: That was the fist UFC I ever saw too. Actually it wasn’t the first UFC I saw, but it was the one that made me think it was an awesome sport. I was like ‘Oh my god, I want to be a part of this.’ When I was in the police academy one of my instructors gave me that DVD. I watched it and said, ‘Once they drop the tight shorts I am going to do that.’

Randy really is that cool, he really is. That is why so many people have looked up to him and gravitated toward him. Randy Couture is the kind of guy that if you share a hotel room with him, and he's got an early flight, instead of turning the light on he will use the light from his cell phone to try and pack his stuff so he doesn’t wake you. That's the real Randy Couture, isn’t that awesome?

Brian Oswald (MMAmania.com): It sure is. It’s been great talking to you Forrest. I appreciate your candor.

Forrest Griffin: I appreciate it and I hope I wasn’t helpful at all.

Brian Oswald is an associate editor for Inside Fights as well as a syndicated writer to Fox Sports. Look for future exclusive interviews from him on MMAmania.com.