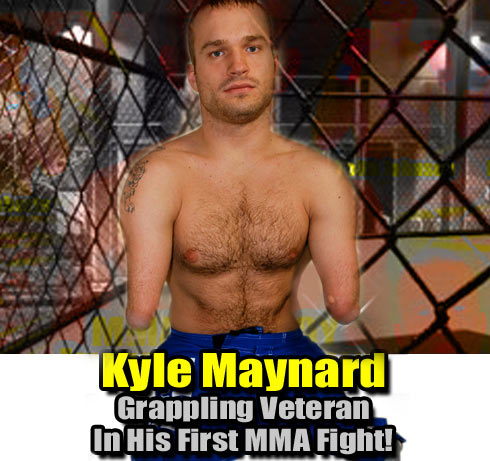 (Atlanta, Ga., March 31, 2009) -- One month after his 23rd birthday, Kyle Maynard will fulfill what has been a lifelong dream. He will compete in his first Amateur Mixed Martial Arts match. The match will take place on Saturday, April 25 in Auburn, AL at The Auburn Covered Arena in an event titled "Auburn Fight Night."

Auburn Fight Night tickets and more information can be found at www.BattlePass.com.

Maynard, a congenital amputee with no elbows or knees, burst onto the national scene when he graduated from Collins Hill High School in Suwanee, GA with a wrestling record of 35-16 in his senior season and a 3.7 GPA. He is the recipient of a 2004 ESPN Espy Award for Best Athlete With A Disability and has been featured on many radio interviews, talk shows and television programs including The Oprah Winfrey Show and Larry King Live.

Currently he works as a speaker for the Washington Speaker's Bureau, specializing in motivational speeches. He is also the author of the memoir No Excuses: The True Story of a Congenital Amputee Who Became a Champion in Wrestling and in Life.

In 2004, at the age of 18 while a student at The University of Georgia and a member of its club wrestling team, Maynard told a USA Today reporter "I’d love to fight in that" when pointing to a Randy Couture UFC poster hanging in his dorm room. The Ultimate Fighting Championship (UFC), is often times referred to as the pinnacle of Mixed Martial Arts fighting.

Maynard was originally hoping to fight in his hometown of Duluth, GA nearly two years ago. The fight did not occur due to the Georgia Athletic & Entertainment Commission denying Maynard a license to fight. The state of Alabama has no Athletic Commission that governs the sport of Mixed Martial Arts.

"I’ve been promoting fights since 2002, nearly 50 events combined, and I’ve never seen someone with the drive that Kyle possesses," said promoter David Oblas. "I’ve seen Kyle overcome every obstacle put in front of him and on Saturday, April 25 he will overcome yet another. This is something that Kyle has wanted to do for years now and something that I’m happy to help him achieve."

Kyle Maynard added, "The first question that I receive from everyone is do I fear for my safety while fighting in the cage? Absolutely not. Despite my lack of limbs I can protect myself just as much as the average fighter. I have been preparing for this fight for years and I cannot wait for Saturday, April 25 to arrive. There is no challenge and no goal that I have worked as hard for as this one. I would like to thank all of my family, friends and training partners for their support as I enter the last 30 days of my training camp."

For additional information and for ticket information regarding Auburn Fight Night please visit www.BattlePass.com. The Auburn Covered Arena will be configured to fit 7,000 people for this fight. Tickets are on sale for $20 in advance and $25 the day of the fights for General Admission. VIP tables of eight are available for $400. Auburn Fight Night will consist of both professional and amateur Mixed Martial Arts fights with several Auburn fighters competing on the event.