UFC 97 to remain in Montreal on April 18

Share All sharing options for: UFC 97 to remain in Montreal on April 18 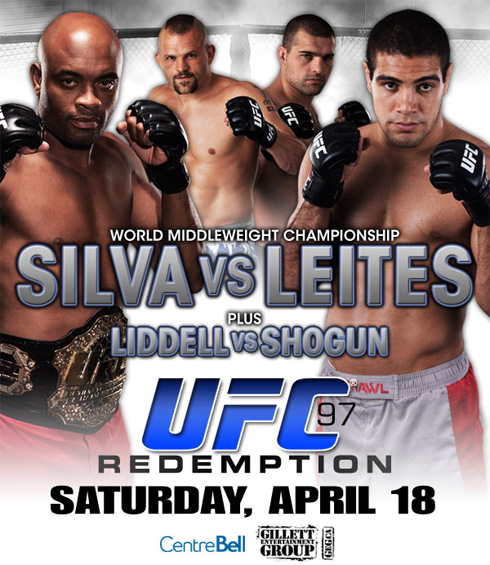 UFC 97 "Redemption," which is scheduled to take place from the Bell Centre in Montreal, Quebec, Canada, on April 18, will remain in Canada after UFC officials were apparently able to convince the Quebec Athletic Commission (QAC) that the show must go on or it would be moved elsewhere, according to CKAC Sports Radio 730 AM and reported on CorusSports.com.

Despite the success of UFC 83 that was held at the Bell Centre in Montreal on April 19 of 2008 and the potential millions of dollars that would be pumped into the Canadian economy, the QAC was originally steadfast on the mixed martial arts rules that have been in place, yet rarely enforced.

The Quebec regulations, which appear to have been ignored for over seven years, forbid elbow and knee strikes, judo throws, slams and even call for a downed fighter to get a chance to recover with his opponent sent to a neutral corner.

The old administration of the QAC was reportedly tolerant of the use of North America’s Unified Rules of Mixed Martial Arts. That apparently went out the window along with most of Mel’s Studio after a near riot at the Titans Fighting event held on February 6.

In the main event against Steve Bosse, James "The Colossus" Thompson immediately went for the takedown and rattled off some textbook ground and pound - despite a supposed agreement to adhere to the old rules of Canadian MMA that disallowed ground attacks.

The crowd reacted violently in disapproval, showering the cage with bottles and debris. The show was halted and both fighters and Referee Yves Lavigne ran for their lives.

That incident had apparently prompted the QAC to spring into action and start doing things by the book -- effectively putting the kibosh on UFC 97. However with millions of dollars at stake and over 22,000 fans who already purchased their tickets, it appears an exception has been made -- at least for now.

Aside from banning foot stomps, details of the arrangement are not yet available, but a press conference is expected later today to make it official.