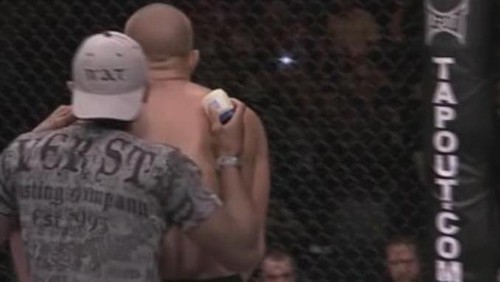 "So in between rounds, (Team St. Pierre's Steven Friend) had this little drill that you do – and Phil Nurse is the one who knows how to do it ... he rubbed your back and tapped your chest; I don’t know exactly how it works. But anyways, what that’s supposed to do is get your energy in line, or motivated or whatever. So in between rounds, we had Phil Nurse do that. The controversy came because Phil Nurse also was putting Vasoline on Georges’ eyebrows ... So Phil Nurse put all the Vasoline on his face, so his hands might have had a miniscule amount left over from that, when he went around the side and rubbed a little point on his back, and tapped on his chest ... If we were trying to grease the back we’d be greasing up and down, we would make it count. We wouldn’t do a little tiny spot in the back ... The whole greasing thing is pretty ridiculous ... They check your body before you get into the cage, there’s an inspector right there. In order for us to grease him up, it would be insane. There are cameras everywhere. We don’t cheat. We don’t need to cheat to win."

-Head trainer Greg Jackson defends the coaching strategies implemented during the welterweight title fight between star pupil Georges St. Pierre and bitter rival BJ Penn at UFC 94 last Saturday night at the MGM Grand Garden Arena in Las Vegas, Nevada. Team St. Pierre's Steven Friend, whom Jackson describes as a "Witch Doctor," implemented the procedure to help "Rush" get his energy in order. Probably a lot cheaper than a Red Bull, but an unusual tactic nonetheless. Then again this comes from a camp who must give themselves titty-twisters prior to each fight. Hard to argue with anything at Jackson's camp considering what GSP and fellow UFC title holder Rashad Evans have been able to do under his tutelage.