Share All sharing options for: Georges St. Pierre named 'Canadian Athlete of the Year' 2008 in landslide 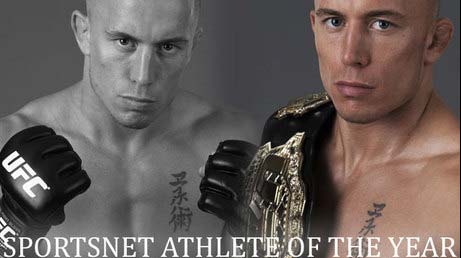 "It's an honour for me to have this award and being the first MMA guy to receive something like this. I want to congratulate the other nominees because they have done an incredible job in their respective sports, making this an even more special honour.... I want to thank everybody for their support and voting for me -- I want to be a good Canadian ambassador for the sport and represent MMA well."

UFC Welterweight Champion Georges St. Pierre responds to being named the 2008 Canadian Athlete of the Year by SportsNet.ca voters in a week-long competition, defeating hockey player Jarome Iginla, Paralympian Chantal Petitclerc, tennis player Daniel Nestor and baseball player Justin Morneau. "Rush" received a resounding 89 percent of the votes. He will defend his 170-pound title at UFC 94: "St. Pierre vs. Penn 2" on January 31. For more on this award click here.