Gina Carano 5th most influential woman in 2008 according to Yahoo!

Share All sharing options for: Gina Carano 5th most influential woman in 2008 according to Yahoo! 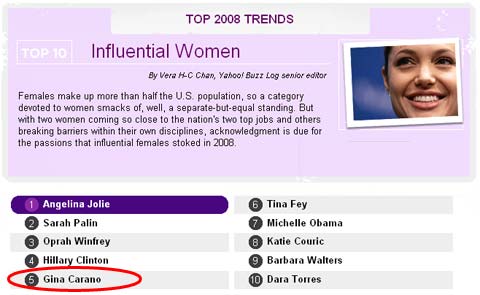 "Undefeated kickboxing champ Gina Carano upped her profile in her turn as Crush on 'American Gladiators,' then later made television history in the first primetime female fight. The TV venue died within a few months, but Carano's appeal proved she was unstoppable...like so many other women in 2008."

If the top dogs at Zuffa needed anymore reassurance just how big Gina Carano is then perhaps this is it. Please get her on a World Extreme Cagefighting (WEC) card pronto (if legally possible). It's crystal clear just how much she can single-handedly contribute to elevate a promotion in particular and the sport in general.