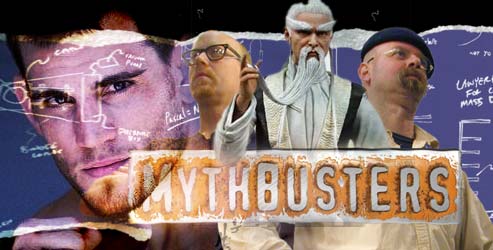 UFC welterweight Jon Fitch knew that a career in mixed martial arts could potentially send him to an early grave, but he more than likely didn't expect it to be while he was still alive and well.

Fitch will be given just a puncher's chance to escape the cozy confines of a wooden coffin on an upcoming episode of "Mythbusters," which airs on the Discovery Channel at 9 p.m. ET on November 5.

The hour-long episode -- entitled "Coffin Punch" -- will attempt to prove or disprove whether or not the three-inch punch made famous in the Quentin Tarrantino-directed "epic-length revenge drama," "Kill Bill 2," is fact or fiction.

Too bad Bruce Lee -- the founder of the famous one-inch punch -- isn't alive today to provide on-set guidance and support ... Adam and Jamie can use all the help they can get.

"Mythbusters," is hosted by two special effects experts, who, according to Web site "use basic elements of the scientific method to test the validity of various rumors, urban legends, myths and news stories in popular culture."

Fitch is currently training in Thailand for about one month, refining his Muay Thai skills to improve his overall mixed martial arts arsenal. He missed out on a bid to capture the welterweight title at UFC 87: "Seek and Destroy" in August, losing to 170-pound champion Georges St. Pierre in a five-round test of will.

It is likely that he will return to the Octagon for UFC 94: "St. Pierre vs. Penn 2" at the Mandalay Bay Events Center in Las Vegas, Nevada, on January 31. A possible opponent for the former number one contender is unknown at this time.