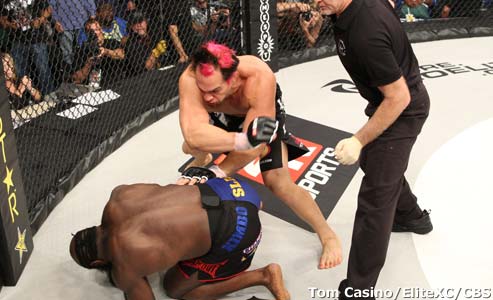 "My original plan was to throw out push kicks, have him think that I'm gonna throw them more, and then to shoot in on him, obviously. But the promoters kind of hinted to me, and they gave me the money to stand and trade with him. They didn't want me to take him down, let's just put it that way. It was worth my while to try to stand up and punch with him."

Not like it matters now, but Elite XC fighter Seth Petruzelli talks about the promotion "hinting" to keep his fight against Kimbo Slice this past Saturday night standing rather than to try and take the street brawler to the ground. He ended up ending the fight standing in just 14 seconds. "The Silverback" indicated that he was paid "six figures" to take the fight against Slice, which is a nice payday for the former contestant on The Ultimate Fighter. The interview took place today on "The Monsters in the Morning" -- a popular Orlando radio program in which Petruzelli is a regular guest to discuss mixed martial arts -- on Real Radio 104.1. It's a very interesting listen to say the least.