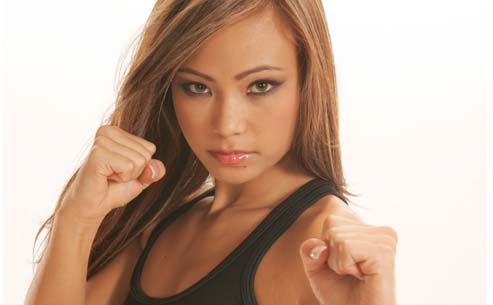 "It’s gonna be an explosive fight. I heard Tyra’s really aggressive and good on the ground so it should be very exciting for the fans."

"The Dean of Mean," "The Hungarian Nightmare," "Lights Out," "The Iceman," "The Arm Collector," "The Baby Faced Assassin," "The Axe Murderer" ... Some fighters do a decent job of living up to their nicknames, but Michelle "The Karate Hottie" Waterson (pictured above) takes the cake. Oh yeah, the former bikini model will take on Tyra Parker tomorrow night on the Strikeforce: "Payback" card, which takes place at the Broomfield Events Center in Denver, Colorado and will air live on HDNet beginning at 10 p.m. ET. Yum.

Check out the full press release after the jump.

SAN JOSE, Calif. —To the naked eye, Michelle Waterson looks more like she should be gracing the pages of Maxim rather than beating up on opponents in caged combat. Just like the old cliché "looks can be deceiving" goes though, it turns out that the petite, 22 year old, otherwise known as the "Karate Hottie," packs as much firepower as she does gorgeous looks.

Waterson, a former bikini model and native of Aurora, Colorado, has been throwing kicks and punches since the age of 10 when she took her first Karate class and, on Friday, she will attempt to give her hometown fans a dose of brutal theatrics when she makes her seventh professional start in mixed martial arts (MMA) competition at Broomfield Event Center.

"It’s gonna be an explosive fight," said Waterson, who will face Tyra Parker on the 10-bout Strikeforce "Payback" card. The matchup will mark Waterson’s debut with the growing Strikeforce organization. "I heard Tyra’s really aggressive and good on the ground so it should be very exciting for the fans."

As a contestant on the 2007 Oxygen network series, "Fight Girls," a reality program that gave female kickboxers the opportunity to train and battle one another while living at a Las Vegas, Nevada martial arts camp, Waterson introduced herself to a national audience.

"It was a great experience," said Waterson of the time she spent filming the show. " It helped me become a stronger person and helped me learn how to deal with problems on my own. It also showed me that fighting is not just physical, but also mental."

Shortly before the TV stint, Waterson, who is half American and half Thai by descent, took a trip to Thailand where she fell in love with the country’s national sport – Muay Thai (Thai kickboxing).

It was the culmination of her past experiences in martial arts and her burning desire to excel at the sport of MMA that, a year and a half ago, led her to Albuquerque, New Mexico, where she has taken up residence to train under Greg Jackson, guru of one of the most finely tuned fight teams in the country.

"I needed to come here to take my career to the next level," explained Waterson. "I’ve learned how to grapple on the ground and use my wrestling as a weapon. I’m a much more well-rounded fighter now.

Her work with Team Jackson produced dividends five weeks ago when she forced an opponent to submit from an armbar just 22 seconds into their bout. "Albuquerque has become a second home for me, and the Jackson team has become my family."

Tickets for Strikeforce "Payback," priced from $30, are on sale at Ticketmaster (303-830-TIXS) and Ticketmaster.com

Broomfield Event Center doors will open for Strikeforce "Payback" at 5:30 PM MST and the preliminary card will begin at 6:30 PM MST. The main card will commence at 8 PM MST.