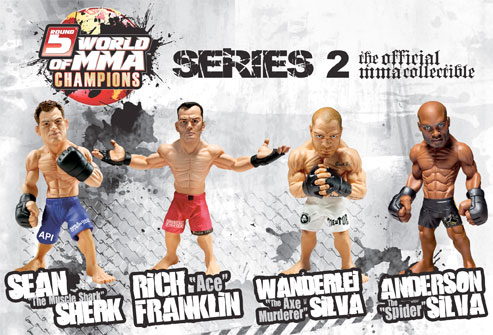 Wanderlei Silva will now join the ranks of those forever immortalized in plastic.

Round 5 -- the MMA industry's fastest growing worldwide collectible figure company -- has landed the the exclusive rights to produce the "Wandy" collectible. And that likely means we won’t see a Jakks Pacific doll of "The Axe Murderer" anytime soon.

Wanderlei will be the final character added to the Series 2 collection. He joins Sean "The Muscle Shark" Sherk, Rich "Ace" Franklin and Anderson "The Spider" Silva to round out the bunch. Series 2 is scheduled to hit stores this November ... just in time for the holiday season.

"After the successful release of our first series, we are thrilled to exclusively secure Wanderlei Silva as the fourth and final character to join our eagerly awaited Series 2," President of Round 5, Damon Lau, tells MMAmania.com of the fourth character announcement.

Round 5’s line of collectable figures are made to celebrate milestone victories and respond to the mass appeal of mixed martial arts worldwide. Similar to the Series 1 collectibles, these figurines are created with a fine attention to detail and are fashioned in the fighter’s signature pose.

The 6" MMA collectible figures will be available in stores across North America, including Champ Sports, F.Y.E. (For Your Entertainment), KB Toys, Toys R Us Canada and distributed exclusively in the United Kingdom by Made For Fighters.

Although these collectibles will not be available in retail stores or through online distributors until November sometime, MMAMania.com has been assured that we will be able to run a contest or two in the near future to giveaway some limited edition samples!

About Round 5
Round 5 is the MMA industry's fastest growing worldwide collectible figure company. Committed to developing intricately detailed figures, Round 5 strives to remain true to the sport of MMA and its’ personalities. Headquartered in Markham, Ontario, Round 5 sells manufacturers product and distributes through retail locations and its official online store found at www.round5mma.com.

Sean McManus is the Director of Media Relations for MMACanada.net. For more information on the MMA scene up in Canada check out MMACanada.net.

Check out and purchase some Series 1 UFC action figures after the jump.