Dana White: 'Fedor did everyone a favor by beating' Tim Sylvia

Share All sharing options for: Dana White: 'Fedor did everyone a favor by beating' Tim Sylvia 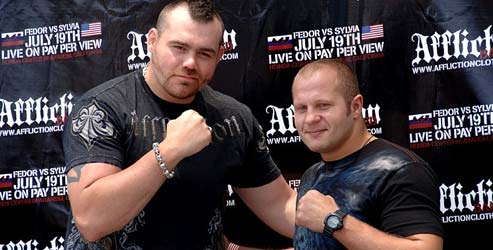 "He’s not the best pound-for-pound fighter, not even close, but he’s one of the four or five best heavyweights. But we all have to thank him for getting rid of Tim Sylvia. He’d been stinking out the joint the last couple of years and Fedor did everyone a favor by beating him so easily and getting rid of him."

UFC President Dana White has some harsh criticism for his former heavyweight champion, Tim Sylvia, saying that Fedor Emelianenko did "everyone a favor" by throttling him in 36 seconds at Affliction: "Banned" last month. "The Maine-iac" was granted a release from his contract after losing to Antonio Rodrigo "Minotauro" Nogueira for the interim division title at UFC 81: "Breaking Point" earlier this year. He has indicated that he would like to return to the promotion in the future; however, perhaps he will change his tune after these latest remarks.