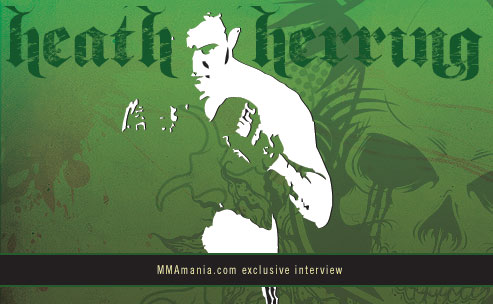 The four-fight UFC veteran and 17-fight PRIDE veteran is also no stranger to fighting in his opponent’s backyard.

Hell, with the exception of UFC 69 (where Herring defeated Brad Imes), the last time Herring fought in his home state of Texas was back in 1997 (when he faced, of all people, Evan Tanner). Bill Clinton had just been inaugurated to his second term as President, and O.J. Simpson had just been ordered to pay $35 million to the families of Nicole Brown Simpson and Ron Goldman.

It was that long ago. Put simply, this guy’s made a career of fighting on some other guy’s turf.

That’s the reason his upcoming fight with Brock Lesnar at UFC 87 this Saturday, August 9 — which takes place in Lesnar’s hometown of Minneapolis, Minn. — is no sweat off Herring’s brow. To say that he’s been in that situation dozens of times is an understatement.

If anything, Herring sees the event’s location as putting more pressure on Lesnar and less on himself. Lesnar, in fact, has called it a "do or die" fight for him.

We caught up with Herring to find out how he’s been preparing for his upcoming scrap, ask him about his apparent renewed focus toward his fight game, and see how his new diet is treating him (he’ll be coming in bigger and leaner for this fight).

Adam Wagner (MMAmania.com): Ever since your UFC 73 loss to Antonio Rodrigo Nogueira you’ve seemed to have a renewed focus on getting your game to that next level. We saw a bit of that in your UFC 82 win over Cheick Kongo, where you came in lighter and in better shape and essentially snapped Kongo’s winning streak that looked, at the time, to be propelling him toward a potential title shot, given that he had just come off a win over "Cro Cop."

Can you describe a bit of how you came to the point where you realized you needed to make some changes?

Heath Herring: No, that was it, absolutely. Going back, watching the Nogueira fight, realizing how close we actually were in that fight. I was in horrible shape. I didn’t really train the way I probably should have for that fight. I got some good people around me and kinda got that belief in myself that I needed to really go, "Hey, I can really make a run at this still, and we can be real successful at this." So, I got a renewed vigor and a renewed focus.

Adam Wagner (MMAmania.com): You’ve been working with a new strength and conditioning coach and nutritionist in Tony Aponte, who also works with fighters like B.J. Penn. In B.J.’s case, it kinda makes sense because he has to drop weight to compete in the lightweight division. But this is sort of uncommon for a heavyweight fighter, who typically can eat whatever they want.

Heath Herring: (Laughs). Right. Well, really to be honest with you, it makes sense. I think my cardio was the best it’s ever been in (the Kongo) fight. We actually beat a cardio monster in Kongo in that fight. So we beat him at his own game. Even finishing up in that third round we were going just as strong as we started off.

So I’m really looking forward to being able to bring that to the table here for the next one.

Adam Wagner (MMAmania.com): So does Aponte have you drinking stuff like organic protein shakes and the like?

Adam Wagner (MMAmania.com): Yeah, to be honest with you, I don’t even know what’s in half the crap he gives me. But it’s been working, so I’m not arguing with it.

Heath Herring: Not too bad, not too bad. I’ll eat anything, so I’m pretty easy as far as that’s concerned.

Adam Wagner (MMAmania.com): Since changing up your game, how has your diet affected your weight and body fat percentage?

Heath Herring: Great. I’m actually going to be coming in I think in the best shape I’ve ever been in for this fight. I’m feeling really, really strong, feeling good about it. So I think it’s the right decision for me.

Adam Wagner (MMAmania.com): Are you lighter or just leaner?

Heath Herring: I’m actually going to be a little bit heavier, I’m more muscular, my body fat’s down. I’ll be weighing in about 250 for this fight. So I think it’s the right way to be going about it.

Adam Wagner (MMAmania.com): You’re also working with a new boxing coach in Jason Parillo, as well as with Adam DiSabato, your wrestling coach. How has that been going?

Heath Herring: Yeah, DiSabato is a Hall of Famer, he’s great. I’ve really enjoyed working with him. I think he’s really improved on our takedown defense for this fight. Things are going really good.

Adam Wagner (MMAmania.com): So the plan is to keep it on the feet?

Heath Herring: You know preferably, that’s where I’d like to be. I feel really good in the stand up. I think that’s my definite edge, my definite advantage there. But I think he’s going to try and take the fight down to the ground if he can.

Adam Wagner (MMAmania.com): I was surprised to see how many submission wins you have. I think it’s something like 16, according to Sherdog.

Heath Herring: Yeah, it’s a lot more than that. They don’t even have half my fights on there. I think I’ve had more than 60 fights, but a lot of ‘em were small shows, so who’s countin’ at that point. Submissions come a lot easier when you go and you hit people. Guys are pretty quick to tap out when they’ve gotten the worse end of the stick sometimes. I’ve always noticed that that’s probably the best way to go.

Adam Wagner (MMAmania.com): You’ve also relocated to Las Vegas, so you have a bunch of changes going on since your last couple of fights. Can you talk a bit about any new training partners you’ve been working with?

Heath Herring: Probably one of my best ones is Mike Whitehead. He’ll probably be working my corner for this next fight. Jay White down at Xtreme Couture has been working with me a lot. Kurt Nail, he was an All-American we brought in from Ohio State this year. Big guy, about a 300 pounder. He came in to work with me on takedowns, takedown defense. And another guy, believe it or not, his name’s George Bush. He’s another guy from Ohio that came down to train with us. So I had a really good camp this time, and I’m just feeling strong and confident about everything.

Adam Wagner (MMAmania.com): Let’s talk about your upcoming opponent, Brock Lesnar. His collegiate wrestling credentials are impressive, to say the least. The guy has fists the size of frozen turkeys. If his fight against Frank Mir is any indication, he could be looking to come at you quick and end it early. What’s your take?

I really just don’t see him being able to finish me in any way, other than I think the best shot he’s got at winning this fight is the lay-n-pray, trying to hold me down and just eek out a point decision.

Adam Wagner (MMAmania.com): You’re just 30 years old, but you’ve been in bajillion fights all over the world.

Heath Herring: Yeah, I’ve fought ‘em all. You name it, I’ve fought ‘em all and been in there with the best. That’s why, when they offered me this fight, I was kinda like, "…Okay. Why not?" He’s got his back against the wall, we’re fighting in his hometown, it’s his third fight only ever, he’s lost his last one, he’s gotta win.

I think if we go out there and just follow our game plan, I really don’t see how things can go wrong. You know, there’s a big X factor in this game, there can always be something that happens, but I’m feeling pretty good about it.

Adam Wagner (MMAmania.com): Yeah, he’s called this a "do or die" fight for him.

Heath Herring: Right, he’s got a ton of pressure, and he’s putting even more pressure on himself. I just don’t see how that’s going to be good or healthy for him.

Adam Wagner (MMAmania.com): And this fight’s taking place up in Minneapolis.

Adam Wagner (MMAmania.com): So how do you feel about that, going into his hometown?

Heath Herring: Oh, man, I’ve been doing that for a long time, so that’s nothing new to me at all.

Heath Herring: I’m a very dynamic fighter. I try to adjust accordingly to who I’m fighting. I’ve got no problem if it goes to the ground. I’d like, of course, to keep it standing up as long as I can.

But you go back to the Kongo fight. That was something we didn’t even train for at all. I didn’t do a day of ground training at all for that fight. So he took it to the mat, and that’s how it went, and we just had to adjust accordingly.

Adam Wagner (MMAmania.com): Let’s go back to your bajillion fights. What’s the hardest you’ve ever been hit?

Heath Herring: You know everybody asks me that question. There’s a lot of fights where I got hit, and I don’t like it. I try to avoid getting hit. I’m not one of these guys that goes out there and wants to get punched to wake up — that’s not my thing at all. I try to avoid the shots. Like I said, I’ve been hit by the best of ‘em. So I don’t know, I can’t really say that one was any different from the other.

Adam Wagner (MMAmania.com): Who do you think you’ve hit the hardest?

Heath Herring: I don’t know, I’ve caught several people with hard shots, and I think they’d all tell you the same thing. And you know, that’s another thing I’ve got going for me: in every one of my fights, I’ve knocked my opponent down — maybe not out, but they’ve definitely fallen down after they’ve been hit. So we’re looking to put Lesnar in that situation to see how he reacts.

Adam Wagner (MMAmania.com): Well with Nogueira, I gotta say that I don’t think he’s ever been knocked out, but in your fight, that was the closest I think I’ve ever seen him to being—

Heath Herring: Yeah, I thought he was out myself, but that’s just the way it goes. I don’t like to leave fights in the judges’ hands or the referee’s hands. So it was my fault for not sticking on him and not finishing him off. I thought I had a little bit more time in that round. That’s a problem I had with my corner and that communication wasn’t there that should have been.

Heath Herring: No. Not really. Gettin’ the win’s feeling good. Not gettin’ the win … no. You can say this or that or the other, but the end result’s the end result. Until we get that victory, that’s about the only way I want to look at it.

Adam Wagner (MMAmania.com): Well Heath, I really appreciate you taking the time to talk with us. I understand you do a lot of interviews, and you seem to be one of those fighters who always takes time to answer our questions, and we appreciate it.

Adam Wagner (MMAmania.com): Lastly, would you like to thank any sponsors, and do you have any parting words for your fans?

Heath Herring: Yeah, Heath-Herring.com is the Web site. If you can plug that for me, I’d appreciate it. Warrior Training Center over here in Las Vegas, they’ve just been awesome. They give us the keys to the kingdom every time we come in there. I really want to give them a big thanks as well. They just couldn’t have been any better. And One More Round Clothing is one of my big sponsors as well, so if we can give them a plug, that’d be great.