Affliction results for 'Banned' at Honda Center on July 19

Share All sharing options for: Affliction results for 'Banned' at Honda Center on July 19 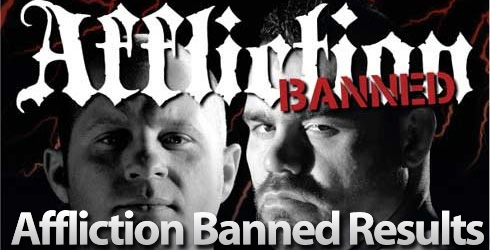 Affliction: ‘Banned’ will begin at 8 p.m. ET (5 p.m. PT) on the Fox Sports Net channel in the United States and The Fight Network in Canada. The broadcast will run for one hour on those networks, featuring two bouts before moving directly to pay-per-view (PPV).

MMAmania.com will provide LIVE blow-by-blow, round-by-round coverage of the action below, beginning with the 8 p.m. ET telecast on FSN.

Many of our readers check-in before, during and after the broadcast to share their thoughts on the action. Therefore, feel free to leave a comment or 10 before you leave and chat with many of our readers during the show — it always turns out to be a great discussion.

Keep in mind that we will also be the spot for the latest news, recaps and post-fight analysis after "Banned."

Round one: Fedor with a big left and then lands a HUGE combo!!! Slyvia goes down and Fedor is pounding on Sylvia!!! Fedor gets his back and sinks in a rear naked choke and Slyvia taps!!!! Thats it its over Fedor absolutely DOMINATES Sylvia!!

Round two:
Andre with a right. Rothwell charges and lands a good right. Andre lands two HUGE rights and Ben is hurt bad!!! Andre takes him down and gets a full mount!!! Rothwell kicks him off and now has full guard. Ben is cut over his right eye. Andre raining down some blows from the top. Andre goes for a heel hook and Rothwell slips out and now Ben jumps on top into Andre's full guard. Nice elbow form Rothwell on top. Another big elbow from Ben. Rothwell landing some rights but theres not much behind them. Now their stood up. Only 20 seconds left. Andre comes out and lands some HUGE rights and then a head kick and a uppercut!!! Another right then a flying knee!!! Andre is putting it on him. Thats the bell, Ben was saved by the bell Andre put an onslaught of punishment at the end of the round and Rothwell is hurt!!

Round three: Both guys clinched up against the ropes. Andre with a big right as they separate. Andre with a BIG uppercut and thats it Rothwell is out cold, GREAT knockout. Andre looked like his old self, he was on target tonight and dished out some serious punishment.

Round one: Linland with a left and Fabio goes right down!!! Lindland now attacks and goes right for a guillotine choke and hes locked it in tight!!! Fabio is rolling around trying to slip his way out. Fabio's mouth is wide open and now he pops out, Lindland jumps right back on top. Lindland peppering in right rights to the body and Fabio is just holding on for dear life. Lindland with some elbows to the body and Fabio is keeping his full guard just trying to stop Lindland from posturing up. Lindland with a big right coming down on Fabio. Lindland now with side control. 1 minute left. Fabio back to the feet. Fabio with a left and Lindland looks a little gassed. Both fighters look gassed and Fabio lands a lazy left. Thats the round 10-9 Lindland.

Round three: Inside leg kick by Fabio. Lindland with a right. Lazy left hook by Lindland but he has nothing behind his punches both fighters are gassed and fighting sloppy as hell. Both guys exchange lazy rights. Inside leg kick by Fabio. Lindland trying for a take down. Inside leg kick by Fabio. Lindland with a mary jab. Both fighters are out on their feet and exchanging lazy sloppy blows that couldnt hurt my 84 year old grandma. Lindland going for a take down and lands a left. Fabio with a body kick, Lindland going for a take down and Fabio falls between the ropes. Both guys exchange lefts and Lindland lands a solid knee. Lindland with a soft combo. Knees from clinch by Fabio and Lindland lands some soft lefts then puts his hands on his knees for the last 10 seconds of the fight, while Fabio stands their watching and gasping for breathe. Thats the bell, Lindland wins easy in what can only be described as two out of shape fighters who gassed after the 1st 5 minutes.

Round one: Front kick by Babalu. Leg kick by Sobral. Another leg kick by Babalu. Both fighters clinched up against the ropes. Now their in the corner. Knee to the body from Whitehead. Babalu misses with a head kick then shoots for a take down and is stuffed. Jabs from Sobral. Nice left by Sobral. Leg kick from Babalu. Both fighters clinched up against the ropes again. Sobral with a knee to the body. Uppercut from Whitehead. Leg kick from Sobral. Right from Whitehead, Sobral now gets a take down but Whitehead right back to the feet. Thats the bell, tough round to call its even to this point.

Round three: Nice jab from Sobral. Leg kick from Babalu. Now they clinch. Sobral goes for an Axe kick and Whitehead gets a take down but they land outside the ring and Babalu had a deep choke in. Whitehead gets lucky. Sobral with a lazy shot. Jab from Sobral. Body kick from Sobral and then a right, Whitehead shoots and again they land outside the ring. Nice jab from Sobral and Whitehead is getting desperate with take downs. Both guys exchange rights. Sobral pulls and goes for a guillotine. Whitehead slips out and now is on top in Sobrals guard. Sobral locks in a Oma Plata! But Whitehead escapes. Whitehead with his usual lay and pray method. Nice left from Babalu, now their clinched up against the fence. Front kick to Whiteheads face. Spinning heel kick from Sobral nips Whiteheads chin. Babalu with knees to the thigh from the clinch. Thats the bell, id say Babalu should win for being more active and asertive but you never know how the judges will score Whiteheads lay and pray technique.

Round one: Ambrose charges with an overhand right now their clinched in the corner. Pyle with some knees to the gut and Ambrose answers with some of his own. Pyle with a body lock take down and goes right into side control, Pyle mounts and Ambrose gives him his back and now Pyle locks in his hooks. Pyle locks in a choke and now flatens him on his belly. Pyle going for a rear naked choke but cant get it just yet. Pyle sinks in the rear naked and Ambrose taps out instantly.

Round one: Martin with a right. Martin with a good stance, he looks light on his feet. Nice kick by Belfort. Martin goes for a single and now their clinched up against the ropes. Knee from Belfort. Nice left from Belfort. Nice left from Martin. Big right from Martin and Belfort looks stunned. Hes wobbled a bit. Both fighters exchange punches. Jab from Belfort. Jab from Vitor. Martin rushes in but misses with a left. Straight right from Vitor. Martin with a glancing right. Thats the round, it was a uneventful round but I give it to Martin who was moving forward the whole round 10-9.

Round two: Nice left hook from Martin but Belfort comes back with a counter jab. Nice body kick by Vitor. Nice body shot Martin. Martin throws a right and slips, Vitor goes for a body kick but Martin grabs a leg and takes him down. Belfort with a full guard. Belfort with a very lazy guard but Martin isnt trying to pass. Vitor to his feet and lands some blows on his way up. Straight right from Belfort. Flying knee from Belfort and Martin is stunned and now Belfort lands a right uppercut and overhand left and Martin is out cold. HUGE knock out.