Share All sharing options for: Juanito Ibarra hasn't filed a formal protest on UFC 86 judging ... yet 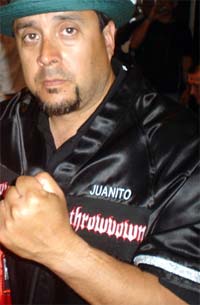 In the wake of the UFC 86: "Jackson vs. Griffin" main event, Juanito Ibarra -- the manager and trainer for Quinton "Rampage" Jackson -- has been saying he plans to protest the unanimous decision his fighter dropped against new 205-pound champion, Forrest Griffin.

Following the fight, Ibarra told anyone who would listen that to become champion "you have to beat the champion." He clearly feels "Rampage" was robbed of a win ... and his championship belt.

Challenger Forrest Griffin won the fight 48-46 on two judges cards and 49-46 on the third.

Keith Kizer, executive director of the Nevada State Athletic Commission, said Tuesday that no formal protest has been filed and that he does not expect one from Ibarra.

Kizer said, however, Ibarra did contact with complaints about the first round scoring. In that round Jackson landed some nice uppercuts, including one that seemed to hurt Griffin.

But, Kizer pointed out, giving the round to Jackson would only mean Griffin would take a majority decision and still be the new UFC light heavyweight champion -- perhaps that's the reason no formal protest has been filed at this time.

Changing the first round would mean the following:

Adalaide Byrd scored the fight 48-46 and gave the first to Griffin. Her decision would become a 47-47 draw.

Roy Hilbert scored the fight 49-46 and also gave the first to Griffin. His
decision would become 48-47, still for Griffin.

Nelson Hamilton scored the fight 48-46. But he awarded the first round to
Jackson. His score would remain 48-46 for Griffin.

Interestingly, many of those on press row had the bout scored a draw giving Jackson rounds one, three and four, while believing Griffin took a 10-8 round in two and won the fifth.

The result is apparently all in the eye of the beholder.