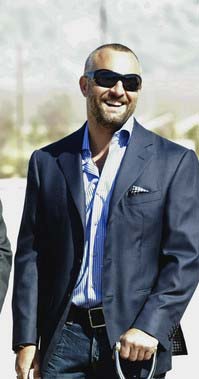 The Ultimate Fighting Championship (UFC) today revealed the major announcement that will serve as an "indicator of where this business is going over the next five years" via Yahoo!Sports.com:

"Lorenzo Fertitta, the president of one of the most successful casino chains in Las Vegas, resigned his position with Station Casinos on Wednesday to work full-time with the UFC."

It's a move that White feels it is the biggest day in the history of the promotion. And he defends his opinion against those naysayers on the Internet who feel it's much ado about nothing.

"The Internet may not consider this huge news, but what the people on the Internet think is huge and what I think is huge are two different things. But you know what? I think I have a pretty good track record. I think this is maybe the biggest day in UFC history. I’m so excited, I can’t begin to explain it to you. This is an historic day for me and this company."

According to the report, Fertitta will concentrate on locking in more major blue chip sponsors, as well as expanding the international reach of the UFC brand to countries such as Italy, France, Spain, Germany, Russia, Dubai, India and other destinations across the globe.

Here's a snip from Fertitta:

"The problem, if there is a problem, is that the business has gotten so successful, it’s requiring more time, focus and attention. Station Casinos is a business my family and I have built and now it’s a multi-billion dollar company. But the reality is, the UFC has gone through so much growth in the last eight years, my brother and I felt we’d be better in divide and conquer mode. He’ll stay at Station Casinos and take care of that and I’ll come over here and work on the issues involving the UFC."

It must be nice indeed to have those types of problems.

To check out the entire article on the thinking behind this decision, as well as what it means for the UFC in particular and mixed martial arts in general, head over to Yahoo!Sports.com and read the entire article before commenting below.