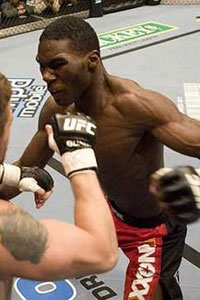 Welterweights Anthony Johnson (5-1) and Kevin Burns (6-1) are set to do battle at UFC Fight Night 14 at The Palms Resort & Casino in Las Vegas, Nevada, on July 19.

MMAmania.com learned about the match up this afternoon.

Sandwiched between those fights Johnson lost to Rich Clementi at UFC 76: "Knockout" via submission (rear naked choke) in a catchweight bout that was contested at 177 pounds because it was scheduled on short notice.

Burns -- a banker by day and fighter by night -- burst on to the scene with an impressive submission win over veteran and Brazilian jiu-jitsu specialist, Roan Carneiro, at UFC 85: "Bedlam" earlier this month on just two weeks notice.

He'll likely look to take this fight to the ground as soon as possible to avoid the heavy-handed attack of Johnson.

Stay tuned for more details on this developing card, which features UFC Middleweight Champion Anderson Silva taking on James Irvin in a non-title light heavyweight bout in the main event of the eving.