UFC 83 weigh-in results for Serra vs. St. Pierre 2 in Montreal

Share All sharing options for: UFC 83 weigh-in results for Serra vs. St. Pierre 2 in Montreal 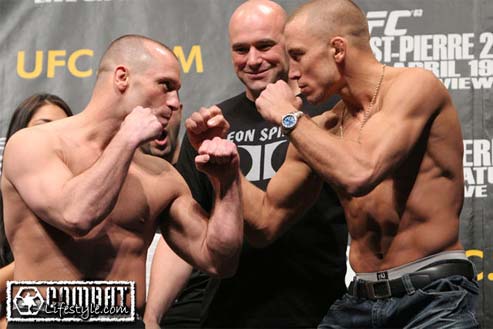 Wow ... talk about a reception for UFC Welterweight Champion, Matt Serra, during the official weigh-in for UFC 83: "Serra vs. St. Pierre 2" this afternoon.

It was a downright hostile crowd at the Bell Centre in Montreal, Quebec, Canada, which is not surprising considering Serra's opponent -- and hometown star -- Georges St. Pierre, as well as his "disparaging" remarks heading into this event.

I just can't fathom what it's going to be like tomorrow night when the fight actually takes place.

"If you're pissed right now, wait until Saturday night," Serra shouted over the crowd. Something tells me the Mounties should crack out the riot gear just in case that prediction is accurate.

At any rate, here are the complete UFC 83 weigh-in results:

*Note: Fighters are allowed to weigh one pound more than the division limit in non-title fights.

The televised portion of the pay-per-view (PPV) event begins tomorrow (Saturday, April 19) at 10 p.m. ET. We will provide LIVE blow-by-blow, round-by-round coverage of the main card action at this time.

UFC 83 quick results, however, will begin to flow earlier than that here at MMAmania.com at about 8:00 p.m. ET with the prelim fights.

Tomorrow is going to be insane — it's going to be absolute pandemonium inside the Bell Centre. Remember to hit us up for all the latest results coverage before, during and after the action.