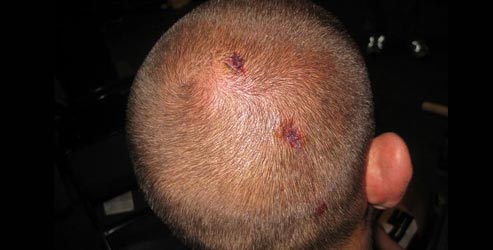 The picture above shows the injuries that Joe Lauzon sustained during his main event fight against Kenny Florian at UFC Fight Night 13 on April 2.

During the lightweight bout, referee Herb Dean stopped the action in the first round when he felt blows that Florian delivered to the back of Lauzon's head were dangerous. He did not deduct any points -- just issued a warning -- nor did he give Lauzon extra time to recover.

It seemed as if Lauzon was not himself after the exchange and he eventually went on to lose in the second round of the bout via technical knockout.

After the fight there was some debate and confusion about whether or not the elbow strikes to Lauzon's head were legal. Here are the pre-fight instructions that Lauzon received in the locker room from Dean:

As Lauzon points out, all three cuts are behind that band. It doesn't do him (or us) much good right now; however, it hopefully clears up some confusion regarding elbow strikes to the dome going forward.