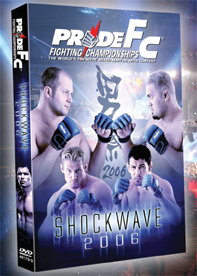 In news that's sure to excite both PRIDE fanboys and MMA enthusiasts alike, PRIDE FC will return to DVD starting on May 6 with the release of PRIDE: Shockwave 2006.

The staff at MMAmania.com spoke directly with the distributor who has confirmed that a total of 12 PRIDE FC DVD's will be released over the next eighteen months. In addition to Shockwave 2006, PRIDE 34: Kamikaze will be released sometime in June.

Zuffa — the parent company of the Ultimate Fighting Championship — purchased the Japanese mixed martial arts promotion (and its biggest rival) early last year. With no television deal and most of its top fighters signing UFC contracts, the entity known as PRIDE became no more.

Now fans will have an opportunity to relive the glory days on DVD. MMAmania.com will preview each disc as its release date becomes available.

In the meantime, here's a quick peek at PRIDE Shockwave 2006:

Check back in a few weeks for more information on upcoming titles and their release dates.