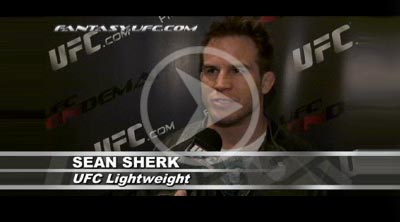 The former lightweight champion, Sean Sherk, shares his thoughts on the two main fights next weekend at the Nationwide Arena in Columbus, Ohio, in this video from UFC.com.

Here are his predictions:

"The Muscle Shark" brings up some good points. Good because yours truly agrees with his picks. That's not saying much, but ever since Jesse Holland and the MMAmania.com readers hijacked the pre-event fight predictions posts I've been quiet in terms of picking winners.

Expect Jesse's and a yet to be determined MMAmania.com reader's UFC 82 predictions to appear in the next few days. I know ... the anticipation is killer.