Share All sharing options for: Randy Couture signs HDNet Fight contract that will be effective when UFC term expires 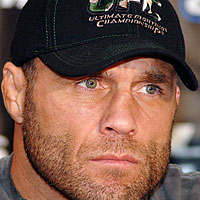 Additional details have emerged regarding the recent lawsuit that HDNet Fights and its owner, Mark Cuban, filed against Zuffa LLC and Ultimate Fighting Championship (UFC) in a Texas court.

According Adam Swift at Sherdog.com, embattled UFC Heavyweight Champion Randy Couture -- who relinquished his strap in late 2007 -- and HDNet Fights have entered into a contract that begins when "The Natural's" UFC promotional contract and non-compete clause expire in October 2008.

At that time, it's believed that HDNet Fights intention is to promote a megafight between Couture and Fedor Emilianenko in Dallas, Texas. Without a contract with Couture, HDNet Fights would be unable to go to court because there would be nothing to "adjudicate."

The point of contention between Couture and Zuffa is the employment contract between the two. Zuffa contends that Couture still owes the UFC two fights, while Couture believes that his responsibility to those fights was eliminated with his resignation, leaving only his promotional contract and non-compete clause.

Cuban and HDNet Fights contend that Zuffa's position regarding Couture is illegal because it interferes with his ability to seek gainful employment and practice his craft. As there is a small window though which Couture can compete as an elite-level athlete, HDNet Fights will look to expedite the court decision.

It's important to note that Texas law prohibits indefinite employment restrictions such as the restrictions Zuffa is attempting to place on Couture.

The current lawsuit also acknowledges the lawsuit brought by Zuffa against Couture and notes that HDNet Fights does not intend for its contract with Couture to interfere with any existing contract between Couture and Zuffa.

Couture's contract with HDNet Fights will only become valid after the promotional agreement between Couture and Zuffa either expires or a court rules it void and/or unenforceable.

Stay tuned for more on this developing story.