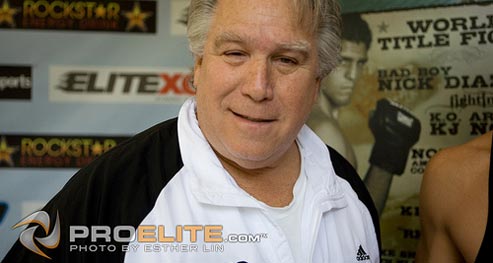 Gary Shaw fired another verbal cannonball across the Zuffa bow in a recent interview with FightHype.com.

This time, the EliteXC Live Events President thinks it was a blunder to match up former WWE wrestling sensation, Brock Lesnar, against Brazilian jiu-jitsu specialist, Frank Mir, at UFC 81: "Breaking Point" in his Octagon debut.

"I like Brock, but it just shows that Dana doesn't know what he's doing. Every time he signs someone, they get beat right away. I guess if you want to get beat right away, you should go to the UFC. It's like I said all along, Dana didn't invent mixed martial arts, he doesn't own the best fighters in the world and he doesn't have the best fights in the world. He should come down and look at our show, although I'm sure he watches them free on Showtime. I feel badly because Brock could've been a star and he ruined him right off of the bat. It was a bad match-up."

There's no love lost between Shaw and White. The two have exchanged back-and-forth barbs and criticism throughout the past year.

Of course, this could all just be a ploy from Shaw to draw attention to his upstart promotion, which has a major event, "Street Certified," scheduled this weekend.

And what better way to promote his company than to have the biggest name out there (the UFC) talking about it.

White takes the bait more often than not.

In fact, he recently had this to say about Shaw and his "so called competition:"

"Gary Shaw is (an expletive) loser, if we were getting competition, it's not coming from Elite XC and both of the people who are watching their shows. This guy is a low-level bottom feeder. He didn't like MMA a few years ago, but when he finally couldn't make money at boxing any more, he came over to this sport to try to leech money out of it."

We all know White isn't one to sit back and digest insults. It's just not in his DNA — he has to fire back.

I wonder what kind of response he's going to have for Shaw bad mouthing the handling of his new $250,000 man, Brock Lesnar.

This could get more interesting real soon.