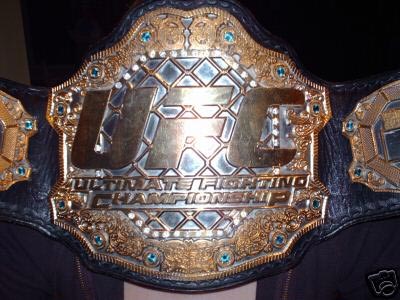 "The ultimate collectible for the UFC fan! This is the time to buy, as the sport grows it will only go up in value! This is the belt put on Ricco Rodriguez after defeating Randy Couture in UFC 39! He's selling it to help raise money for a school we are opening in the south. UFC 39 was a fight for the history books. With heavyweight title up for grabs one of the greatest fighters of all time enters the cage with the underdog, Ricco, and after some very tough fighting on both sides, Ricco is finally able to control and dominate Randy Couture, eventually winning by verbal tap out. Very few heavyweights can say they tapped Randy Couture. It's a perfect example of how skilled Ricco Rodriguez really is, though he rarely gets the credit he deserves. It should also be noted that after that fight, randy dropped from heavyweight to light heavy, and has only returned to the heavyweight division in the last year.... This sport is blowing up. don't be the guy kicking yourself 20 years from now wishing you bought this when you had the chance. They don't come on the market very often. Ricco isn't excited to part with it, but has a family now and is looking at the future."

I guess he held onto the strap even after losing it to Tim Sylva via knockout at UFC 41: "Onslaught" in 2003.