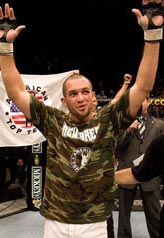 UFC.com is reporting that Wilson Gouveia (9-4) will fight Jason Lambert (23-6) at UFC 80: "Rapid Fire," setting up a light heavyweight showdown that was supposed to happen at UFC 76: "Knockout" back in September.

The original match up was postponed because Gouveia suffered a severe nose break training for the bout. Now he appears to be fit and his opponent has remained unchanged.

Since a unanimous decision loss to Keith Jardine in his Octagon debut at The Ultimate Fighter (TUF) 3 Finale, Gouveia is on a three-fight win streak inside the Octagon.

The American Top Team-trained Brazilian jiu-jitsu specialist will make to look to make it four in a row against Lambert after finishing Wes Combs, Seth Petruzelli and Carmelo Marrero all by way of submission. 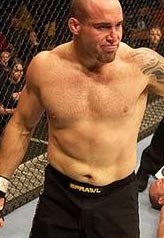 "The Punisher," however, has not been submitted since 2001. And he demonstrated solid submission defense during his last bout with Babalu — one of the best grapplers in the sport — to survive the first round en route to a knockout finish at UFC 68: "The Uprising" in March.

This booking completes the nine-fight card. It also means that heavyweight Mirko Cro Cop will more than likely not compete at the Metro Radio Arena in Newcastle, England, on January 19. The Croatian speculated (incorrectly) that he could return on for this event.