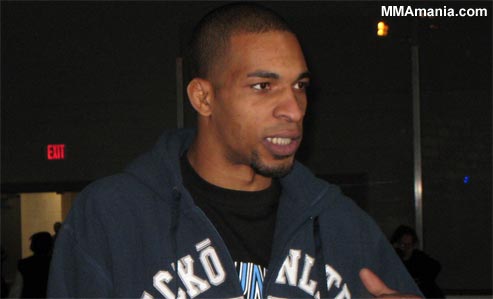 No opponent has been named at this time. In addition, no venue has been announced for the show.

Not Earth-shattering news; however, we get a lot of messages about what happened to him and what's up next since he did not compete during the TUF 5 Finale. Remember: He did sustain an injury after the competition that kept him out of action perhaps longer than expected.

Our conversation was short because I bumped into him right before the weigh-ins for UFC 78: "Validation" were about to start. He was real cool and we'll more than likely catch up with him before his fight in two months.

(It was actually his first UFC event -- pretty odd to hear.)

Anyway, if you have any questions or want us to find anything out feel free to leave some suggestions in the comments section below and we'll consider them.