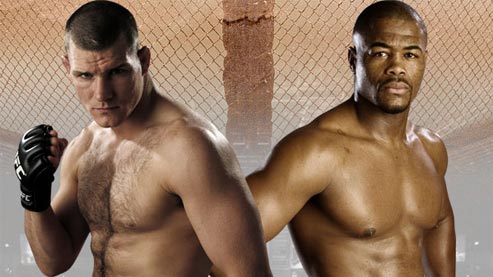 Light heavyweights Rashad Evans (10-0-1) and Michael Bisping (14-0) will headline the November 17 show at the Prudential Center in Newark, N.J., according to UFC.com.

The bout pits the winners from seasons two and three of The Ultimate Fighter (TUF) reality series against one another. It also ends a rather bizarre situation to find a "marquee" bout to bolster a very solid yet rather underwhelming card in terms of high profile names.

Leading up until today it was widely speculated that Evans would rematch Tito Ortiz. However, it seems as though the UFC lost its patience with "The Huntington Beach Bad Boy" on a bout agreement.

So now Bisping -- not Ortiz or Dan Henderson as previously rumored -- has stepped up to the table to fight Evans.

"The Count" most recently scored a controversial split-decision win over Matt Hamill at UFC 75: "Champion vs. Champion" on September 8. The two were supposed to rematch immediately, but Hamill underwent knee surgery and will be out until early 2008.

Evans is itching to get back in the cage after fighting to a draw with Ortiz at UFC 73: "Stacked" on July 7. He, too, was supposed to rematch Ortiz right away but things behind the scenes clearly did not go as planned.

This showdown, which features two up-and-coming undefeated fighters, is the main event of the evening.