Bye-Bye Babalu: UFC releases the Brazilian from his contract

Share All sharing options for: Bye-Bye Babalu: UFC releases the Brazilian from his contract 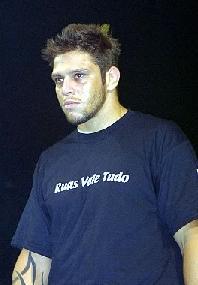 The UFC released veteran light heavyweight Renato "Babalu" Sobral from his contract after a questionable decision to choke David Heath unconscious despite a tapout and attempts by the referee to have him release the submission hold.

UFC President Dana White revealed the news in a conference call today to promote UFC 75: "Champion vs. Champion" that our friends at BloodyElbow.com were able to listen in on.

Here's a paraphrased snip from White:

"It's the fight game and anything could happen, but that had Babalu had an arm, knee, or ankle he'd never fight in the sport again. Even though he was a fan favorite, fans turned on him and he made a big mistake."

The beef began when Sobral and Heath exchanged unpleasantries during the UFC 74: "Respect" weigh-in for the 205-pound tilt.

During the fight, Babalu sunk-in a fight-ending anaconda choke on a bloodied and beaten Heath in the second round. Heath tapped, but Sobral didn't relent despite verbal and physical commands from the referee in charge of the action, Steve Mazzagatti.

It's important to note that Heath suffered no ill effects from the choke. Regardless, the Nevada State Athletic Commission (NSAC) withheld half ($25,000) of his purse ($50,000) following the bout to review the tape and determine whether or not disciplinary action is required.

No decision from the NSAC has been made at this time.

In post-fight remarks, Babalu was quoted as saying the Heath "deserved it" and needed to be "taught a lesson." Since that time he has tried to distance himself from those comments.

Babalu made his Octagon debut as a heavyweight against Maurice Smith (unanimous decision win) back in 2000.