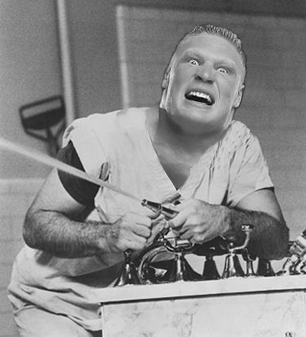 Brock Lesnar was interviewed by MMAWeekly.com today about his future in MMA. I wouldn't go so far as to call him moonstruck, but his nonsensical yammering makes our interview with Josh Koscheck sound like the Gettysburg Address.

"I'm looking to fight somebody with credentials. I'm not just talking Silver Medals in Judo. I want a belt. I've fought a lot of tomato cans. I've already had it. You know? I want a fillet Mignon. Let's do it, and do it right. I want to fight somebody, somebody that's got credentials because I've got them too. There isn't a wrestler, there isn't a heavyweight out there my size that has done the things I've done."

Apparently Lesnar has been slugging it out in his kitchen pantry or maybe the pasta aisle at his local Wegmans since he claims to have fought a lot of tomato cans. Wasn't his debut just two months ago at K-1 HERO'S DYNAMITE! in Los Angeles?

Granted his opponent, Min Soo Kim, wasn't exactly tearing up the division at 2-5, but when does a 1-0 record against a can of creamed corn (sorry tomatoes) give you the right to call out accomplished veterans like Fedor Emelianenko, Randy Couture and even Tim Sylvia?

"You take Randy Couture for example, I mean he's the heavyweight champion of the UFC, but he's a small heavyweight. Let's face it, Tim Sylvia was not a legitimate heavyweight champion. I enjoyed watching Randy beat the shit out of Tim Sylvia. I enjoyed that. I mean take a look at this guy, Tim Sylvia, the guy's feet; they're damn near webbed. He looks like the Swamp Thing. The guy is a vulture. He can't wrestle worth a crap. He's got a jab and a little right hand. There's no way. I'd double-leg his ass right through that cage so fast, and that would be the end of the fight. I'm tired. I'm tired of this. Brock Lesnar wants to fight somebody, somebody with credentials, and Tim Sylvia ain't the guy."

What surprises me about Lesnar is his complete lack of humility. Ordinarily I would applaud self-confidence and focused determination, but this whole pompous shtick reeks of familiarity.

Didn't we already go down this road a few years back?

In 2004, Lesnar abandoned his career in pro wrestling to pursue a career in pro football with the Minnesota Vikings. Despite never having played a single football game in college, Lesnar was confident that his athletic ability and will to succeed was enough to get him to the promised land.

"I am dead serious about this ... I ain't afraid of anything, and I ain't afraid of anybody. I've been an underdog in athletics since I was 5. I got zero college offers for wrestling. Now people say I can't play football, that it's a joke. I say I can. I'm as good an athlete as a lot of guys in the NFL, if not better...I wasn't the best technician in amateur wrestling. But I was strong, had great conditioning, and a hard head. Nobody could break me. As long as I have that, I don't give a damn what anybody else thinks."

"I'm going to be attending the UFC this weekend, and I'm going to go down and watch and see in person, because I've watched these guys fight on TV. I'm going to go down there and see for myself and watch these heavyweights that I know I can beat. There isn't a guy like me walking around that can do the things that I do. These guys, they don't know. Let's put it this way, in college, or everywhere that I've gone, everybody has said that I'm one strong son-of-a-bitch, and that's what I am, and I'm able to back it up."

Brock Lesnar failed to make the roster for Minnesota Vikings and balked at the opportunity to play for their developmental league. Despite his size and athleticism he just wasn't good enough to play with the professionals regardless of how easy it may have looked on television.

Min Soo Kim notwithstanding, what makes him think that a career in mixed martial arts will be any different?

If size and strength were the deciding factors in MMA, then Bob Sapp would have victories over "Minotauro" Nogueira and Mirko Cro Cop -- not the other way around.

And by Lesnar's law, shouldn't Michael Jordan have retired as an All-Star outfielder with the Chicago White Sox?

I'm sure Lesnar will eventually find his way to the UFC or perhaps EliteXC and people will pay to see him the same way carnival patrons pay to see the bearded lady.

For me the signing can't happen soon enough. The sooner we get him in here, the sooner we can shut him up. Until then, we'll have to endure his narcissistic commentary on all things Lesnar.

Lesnar could have probably gone down as one of the best pro wrestlers of all time. Instead he'll join Kurt Angle as just another performer who took one too many chairshots.