Share All sharing options for: UFC 77: Franklin vs. Silva II in Cincinnati, Ohio

You know the old saying: Be careful what you wish for, you just might get it.

Rich Franklin looks to reclaim the middleweight throne at UFC 77 from Brazilian interloper Anderson "The Spider" Silva, winner of their first contest by brutal technical knockout back in October 2006.

And to make things more interesting, they're scheduled to face off at the U.S. Bank Arena on October 20 in Franklin's hometown of Cincinnati, Ohio.

Franklin looked like his old self after dispatching middleweight contender Jason MacDonald during Zuffa's first trip to Ohio at UFC 68.

But a less than stellar performance (and a few close calls) against Yushin Okami at UFC 72 led many to believe that Franklin is not the same fighter he was prior to the Silva destruction, and that a rematch of their first encounter would yield similar results.

I personally think that Rich Franklin is a talented striker. For me it's not a question as to whether or not he's making adjustments from their first fight.

It's a question as to whether or not those adjustments will be enough.

Anderson Silva has looked nearly invincible lately, and now he is not just imposing physically, but mentally as well.

I can't say for sure if Silva is in Franklin's head, but I think these screenshots of Franklin during Silva's stoppage of Nate Marquardt say quite a bit about the psyche of the former champ: 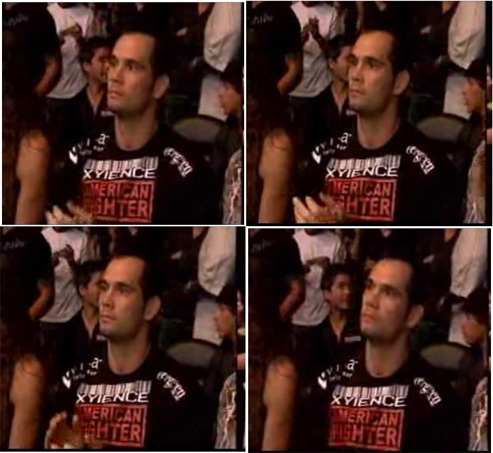 At first glance the trip to Cincinnati looks like a benefit for Franklin, but the real benefactor here is Zuffa and the UFC.

What gets shattered at UFC 77 remains to be seen. Especially with Franklin vs. Silva II as the main event.