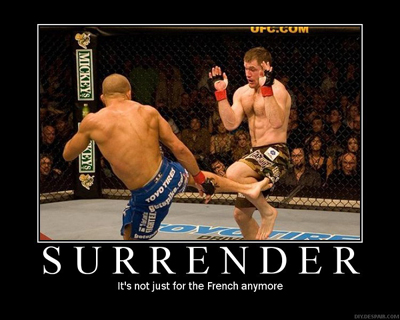 It's been just one week since UFCmania launched our latest contest and the feedback had been unbelievable.

We've received literally hundreds of hilarious (and not so hilarious) submissions, as well as those that are indeed "motivational."

Because of all the entries we've received thus far, the contest will end tomorrow, Sunday, July 1, at 5 p.m. ET. If you plan to enter but haven't do so yet, now's that chance.

Big thanks to all the readers who participated -- this is going to be a tough one to call.

We hope to announce the winners early this week and prior to UFC 73 so that BetUS.com -- who helped sponsor the contest -- has enough time to make those $100 deposits.

And maybe you want to use the cash that UFCmania is also giving away to host a killer party this upcoming Saturday for the big event.

Those who did enter will hear from us shortly, whether you have won or not. Thanks AGAIN for your participation and we look forward to seeing some more great stuff.

And even if you have no interest in creating your own poster, I highly recommend that you check out what other readers have contributed -- it's high comedy.

For all the details on the UFCmania "Motivator" contest click here.