Share All sharing options for: Nick Diaz: 'I would whoop' Frank Shamrock 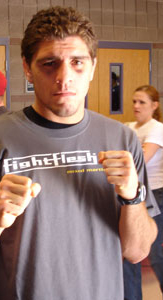 Here's a snip from Diaz:

"I watched his last fight and no disrespect intended but I think I would whoop his ass."

In the article, it mentions that a formal offer of intent has been delivered on behalf of the Diaz camp to the promoters of EliteXC — the organization to which both fighters now belong — to set the fight up.

Shamrock is coming off of second round submission over Phil Baroni this past weekend. It is widely reported that he competed in the fight despite a shredded knee, which will require surgery to repair.

Diaz is still serving a suspension handed down by Nevada State Athletic Commission (NSAC) for testing positive for a banned substance — marijuana — after his sensational win (later ruled a no contest) over PRIDE FC Lightweight Champion Takanori Gomi at PRIDE 33: "Second Coming," in February.

Both fighters are far apart in weight — about 25 pounds. Diaz, however, can certainly pack on a few more pounds.

Based on the injuries and suspensions, this fight more than likely wouldn't happen for quite sometime. There's also the disparity in weight.

But there's no doubt Diaz would bring it if the two ever met — and he might even talk a better game than Baroni.