Share All sharing options for: Shamrock beats back Baroni for Strikeforce title 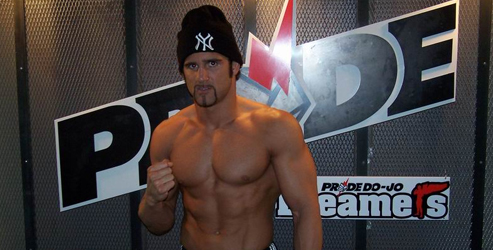 Shamrock dominated the fight from the opening bell, beating "The New York Bad Ass" at his own game with hard and crisp punches that found their mark early and often.

In a scene eerily reminiscent of his fight with Renzo Gracie earlier this year, Shamrock was docked one point for two illegal blows to the back of Baroni's head in the first round.

It didn't matter, Shamrock came out for round two and rocked Baroni once again and managed to take his back and positioned for a rear naked choke. It was only a matter of seconds before Baroni was lifeless and purple within the six-sided cage.

Both fighters didn't answer the call for the final announcement -- Baroni stormed off and Shamrock remained in his corner sucking wind and apparently nursing a torn ACL/MCL that he sustained two weeks before the bout.

In fact, Shamrock -- despite looking very fit and game during the fight -- was escorted out of the ring with his arms wrapped around both his cornermen.

The man is simply the Drama King. But hats off for a nice fight.

In other news, Cung Lee looked fantastic on his feet, putting on a kickboxing clinic against Tony Fryklund in a 185-pound bout. He went on to win via technical knockout in the third round.

Lee was the epitome of skill and grace tonight. I've never seen anything quite like it.

The brother of Mauricio "Shogun" Rua, Murilo "Ninja" Rua, weathered an early blitz from Joey Villasenor to capture the EliteXC middleweight crown in the second round.

Honestly, I can keep going on and on. In the end, this was an extremely entertaining evening of mixed martial arts.

It goes to show that there really is some fantastic competition and great fighters outside the UFC. The guys over at EliteXC are also very supportive of what we do here at UFCmania, which makes it that much easier to enjoy such a great show.

Definitely check out the fights when you can, it was great action from top to bottom.

For a complete play-by-play head over to Sherdog.com.

Just for those unaware, this was a joint event between EliteXC and StrikeForce promotions.