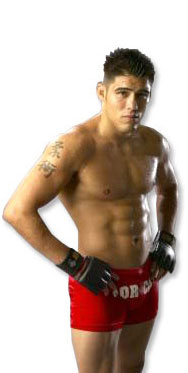 One-time UFC middleweight title contender David Terrell is eyeing a return to the Octagon later this year, according to GraceFighter.com.

However, he'll compete at 205 pounds this time around and not 185 to eliminate the injuries that have dogged him for the better part of two years.

"From a fighting perspective, the past 2 years have been hard ones on David Terrell. The Gracie Jiu-jitsu Black belt has endured a string of injuries that have kept him out of the cage. Forced to sit on the sidelines he has instead been focusing on a successful school he runs out of Santa Rosa, California. Meanwhile the sport of MMA has exploded onto the American market in ways no one envisioned just a few years ago.

Now injury free and wanting a piece of the pie, Terrell eyes a return to fighting. This time however he seems determined to fight at the 205lbs weight limit instead of his recent 185lbs outings. The drastic weight cut to 185 proved too demanding and often left him drained of energy and susceptible to sickness. We should see Dave back in the UFC at the new weight mark later this year and those of us who know him can't wait."

Terrell burst onto the scene in his UFC debut in 2004, knocking out Matt Lindland just 24 seconds into their bout at UFC 49. The upset earned him a shot at the middleweight title, which was vacated by Murilo Bustamante.

He lost that championship bout to Evan Tanner via technical knockout at UFC 51 in 2005.

Terrell — a jiu-jitsu student of Cesar Gracie — would fight just one more time after the loss to Tanner, submitting Scott Smith with a rear naked choke at UFC 59 in 2006.

He was scheduled to fight Yushin Okami at UFC 66 in December 2006, but had to pull out of that bout with an injury. It marked the third time in his UFC career that he had to withdraw from a fight.

Terrell has some sick ground skills and obviously some power in his hands as evidenced with his destruction of one of the top middleweights in the world, Matt Lindland.

However, with Rampage Jackson, Dan Henderson, Mauricio Shogun Rua and all of the other superb additions to the 205-pound division lately, it's going to take a big effort on the part of Terrell to get to the top of the heap.

More than just one punch, that's for sure.