Share All sharing options for: Recap: The Ultimate Fighter (TUF) 5 Episode 11 and Episode12 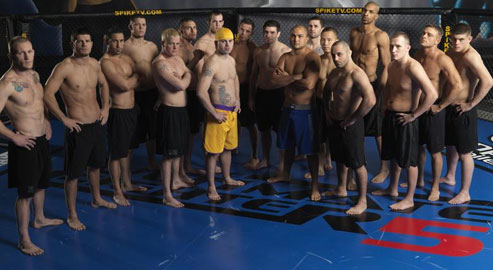 As Bruce Buffer would say: "It's time!"

Season five of The Ultimate Fighter is in the books and episodes 11 & 12 answered a lot of questions (and broke a lot of hearts).

We start off in the locker room of Team Pulver following last week's beatdown of Matt Wiman at the hands of Manny Gamburyan.

Special guest star Karo Parisyan is excited at the advancement of his cousin and decides to celebrate by playing patty-cake with Nick Diaz's face.

Well, anyone who knows the Diaz brothers (or saw Episode 2) knows this is more than just cause to start a rumble. Nate justifies his behavior with such memorable one-liners as "Get off my nuts" and "Don't try and close the distance on me."

Speaking of one-liners, anyone else get a laugh out of the preview for Heartbreak Ridge when Clint Eastwood tells a jailhouse thug: Go hump somebody else's leg mutt face before I push yours in."

Instant classic. Heartbreak Ridge could be the modern day Book of Proverbs.

Anyway, Karo walks outside and asks the camera "Do you know who I am?" Apparently that North Hollywood address is wearing off on his ego as he continues to rant: "There's so much stuff I could do to these fucking idiots."

I guess acting like a mature and humble role model isn't one of them.

It's time for the fight selections and it's nice to see that Dana has a sense of humor when it comes to Jens sanity. Dana rattles his cage by suggesting the teammates fight one another but then quickly retracts when Jens goes silent.

I'm glad that Dana was having such a great time overseas in Manchester. I guess that call was made before Cro Cop was decapitated with a head kick.

The fights are officially Manny vs. Joe followed by Nick vs. Gray. I'm hoping that after all this time the fights are worth the wait.

Before the fights Dana flies home and surprises the cast with dinner. Ever the conversationalist, Dana asks what they miss the most besides women.

Cole apparently forgets he's on camera and blurts out "MySpace!" and out of nowhere we get Andy Wang announcing that he's lactose intolerant.

Earlier I mentioned the Book of Proverbs. Well here's a famous proverb for future castmates: Better to keep your mouth shut and have people think you are a fool then to open it and remove all doubt.

Dana also has a special surprise for the semi-finalists: A free subscription to DirecTV! I'm not sure which was more uncomfortable, hearing the winners feign excitement or listening to Joe fumble through the promo.

It's fight time and Joe talks about sticking to his gameplan. Manny says he hates gameplans and has no gameplan. Then he rattles off six or seven different tactics he plans on using and says "That's my gameplan." Nothing like consistency.

Joe also remarks how Manny has short little arms. I nervously muttered to myself "So does a T-Rex."

Dana once again feels it's necessary to comment on Manny's height and how it will keep him from winning. Just like last time, this guarantees that he will. Thanks Dana.

Round one is underway and Joe misses a high kick. Manny seizes the opportunity and takes down an off-balance Joe. Manny sinks in a guillotine and Joe picks him up off the ground but doesn't have enough juice to slam him.

He kind of sinks down and rolls out. Manny slams him back down and stays on top. Joe looks for a couple of submissions but Manny isn't having it. He slowly pushes Joe to the cage and keeps the pressure on. Joe eventually gets up but Manny brings him right back down. Joe looks overwhelmed as time expires.

Round two starts and Manny shoots twice and misses. They tie-up and Manny pushes him to the cage. Joe looks desperate and flops to his back. Manny drops in and lands some shots. Joe's mouth is wide open as he eats some elbows. Manny's pace is relentless. Mazz has seen enough of the ground game and stands them up.

Manny shoots and gets stuffed. They tie-up once again and Manny trips Joe down and then whips him around. They get back to their feet and Joe is holding on but has no offense.

At the start of round three Manny looks relaxed and confident. Joe looks gassed and confused. The ring girl looks hot and doable. Manny shoots and misses but follows up with a HUGE leg kick. Manny takes him down again. Joe is getting manhandled. Manny keeps punching away like a piston.

Joe miraculously finds a way to reverse it in the last minute and gets Manny's back. Joe is starting to land some shots. Manny covers up. Joe sinks in a guillotine and tries to roll him over but Manny powers his way out of it. Manny gets back to top position and pounds away until the end.

Wow. This fight was all Gamburyan. I was rooting for Joe the entire season but even through rose-colored glasses I can say this was pure domination. Manny controlled the entire fight, pushed the pace and NEVER stopped working.

I hate to get all Wrestlemania 3 but Manny is both the irresistible force and the immovable object. Win or lose at the finale he is going to make some noise in this division.

And no question Joe will be back. At just 22 he still has a bright future ahead of him if he wants it.

Afterwards Dana apologizes for underestimating Manny. I wish he would apologize to me for spoiling the outcome with his repeated "Manny will never make it" speech.

Team Penn is gearing up for Gray's big match and it's not a good sign that his coaches are wondering if he's giving 100%. Gray admits to loving this sport because he enjoys gets punched in the face. Having a career in Real Estate, I kind of know how he feels.

Back at the house, Diaz and Geraghty are embroiled in a battle of fruit cocktail. Out of nowhere, the rest of the gang gets involved and the fruit goes flying back and forth ala Animal House.

This went on for quite some time and the only thing I cared about was where they were getting so much fruit. I wouldn't say they wasted a lot of food but somewhere in Darfur, Sally Struthers was weeping inside a hut made of mud and rocks.

Dana drops by the house and must have thought things were getting a little too chummy between Penn and Pulver because he whips out a block of cash and promises to give $10,000 to the winner of a three round ping-pong match.

As if that wasn't enough pressure, he also offers $1,000 to each fighter of the winning coach. As expected, the guys all stare at the cash like it's Ali Sonoma in nothing but pasties and high-heels.

So the game gets underway and BJ looks insanely focused while Jens admits to feeling nauseous. During the match they actually show the ping-pong ball in slow motion and then to top it all off we see Dana laughing in slow motion too.

Folks, watching Dana cackle and sneer at these guys as they drove themselves mad over the outcome of the game, and watching him sit perched on the ledge waving that wad of bills, I realized this was not about BJ vs. Jens. And it certainly wasn't about awarding money to guys who may have earned it.

No, this entire charade was about one thing: Dana wielding his power over a bunch of guys that he employs. During his little puppet show, I wondered if it was possible for him to understand what it says about a person's character when they use their authority or position to take advantage or toy with people on an emotional and psychological level.

I'm probably reading too much into things, but it was a sad moment for me.

In the end, Jens took home the prize as he beat BJ in a very close game of table tennis. Most of Team Penn was cool with it (save Wiman) but BJ looked angrier than Ron Goldman during the OJ verdict.

It's down to the last day and the guys are starting to say their goodbyes. BJ is glad he did the show and says "Martial arts is about the little guys fighting the bigger guys." Maybe he was referring to martial arts promotions now that Dana and Co. own everything this side of Bodog.

On Team Pulver's side Jens and Diaz exchange sweet nothings on the treadmill as Weems and Geraghty diligently practice their WWE moves in the ring.

Of course no last day would be complete without a heavy night of drinking and Andy makes Sake-bombs to "show them the Asian culture".

You make a fine representative Andy. And I'm sure the Asian-American Society applauds your efforts.

Emerson and Cole can't handle their liquor but in different ways. Emerson gets increasingly violent against inanimate objects (excluding Weems). Cole gets a bit dainty and starts doing cartwheels and cuddling up to Joe Lauzon.

And it looks like Cole learned a very valuable lesson that night: If you're the first to pass out, you will be owned. He should be thanking his lucky stars it was only a haircut. I remember a bunkmate getting sloshed in our barracks at Ft. Knox. Lets just say his Tank ended up with a few extra shells in it.

Before the fight Gray remarks how Diaz is an emotional fighter. Then we hear Diaz through the looking glass about being an emotional and mental fighter. His answer to that? "I don't even know what the fuck that means."

Round one begins and Gray rushes in, ties him up and takes him down. Diaz is looking for a kimura. Gray's trying to move around but Nate traps him at every attempt. Gray finally rises up and lands some big shots.

He breaks free and tries for side control but Diaz is working the limbs. Diaz is showing incredible skill from the bottom. Gray powers out and lands some more shots. Diaz is bleeding badly.

They get back to their feet and after a quick exchange Gray scores a takedown. Diaz ties up his arm as Gray tries to punch from the top. Gray rests and starts taking shots to the head from a busy Diaz underneath. Diaz switches and almost gets the arm. The round ends while working the choke.

Round two has Gray throwing wild punches after tying him up. He finds a guillotine but Diaz squeaks out and reverses his position. Diaz is in side control. Diaz now unloading punches to the body. Gray rolls to his knees and gets welcomed with a guillotine. Diaz has it locked in tight and forces the tap.

Although it didn't go the distance, this was a great fight that was action-packed from beginning to end. Nate Diaz showed what jiu-jitsu is all about and how it can be turn a bad position into a winning position.

Gray was aggressive and landed some solid punches but he was neutralized on the ground. It's nothing to be ashamed of because he lost to an excellent fighter. I have a feeling that what happened between Nate and Gray could be what happens between Nate and Manny. I'm really looking forward to the finale.

I'll end this recap and this season the way BJ ended his stint as coach. He put it best when he told Gray:

"It's not about getting knocked out or getting tapped out. It's about where I go from here."