UFC 75 tickets on sale this week for London show

Share All sharing options for: UFC 75 tickets on sale this week for London show 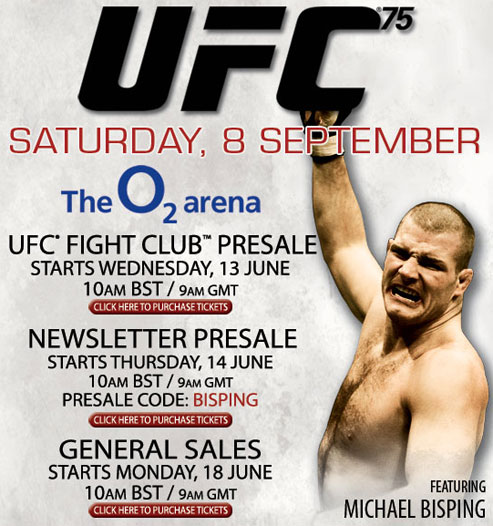 UFC 75 tickets will go on sale tomorrow, Wednesday, June 18, for the first show in London, England, since 2002.

UFC Fight Club members will get the first crack at seats, beginning at 5 a.m. ET.

On Thursday, June 19, more presale tickets will be opened up to UFC email newsletter subscribers also at 5 a.m. ET. Head over to UFC.com and sign-up today to get on the distribution list. In the meantime, use the password BISPING to gain access.

The general public can purchase tickets on Monday, June 18, at, you guessed it, 5 a.m. ET.

Tickets can be purchased through Ticketmaster.com or StubHub.com.

Both titles (UFC light heavyweight and PRIDE FC middleweight) will be on the line.

In addition, British star Michael Bisping -- the light heavyweight winner of The Ultimate Fighter (TUF) 3 – is on the card and will face an opponent who has not been named at this time.

There's also some speculation that Mirko "Cro Cop" Filipovic and Cheick Kongo will face off in a heavyweight showdown.
All in all, it's shaping up to be a great night of fights. If you live in the London area I wouldn't wait too long to purchase tickets.