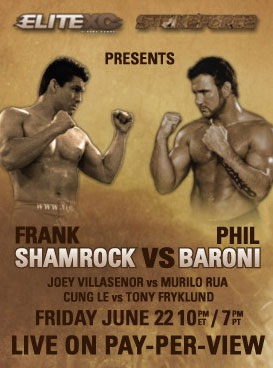 "Look at who's in the middleweight division there [UFC]. It's a bunch of bums, reality TV rejects."

-- During a conference call to promote his 185-pound showdown with Frank Shamrock on the June 22 Strikeforce/Elite XC fight card, former UFC fighter Phil Baroni has some choice words for the current middleweight division talent pool. UFC President Dana White announced that he will double Baroni's purse if he can knockout Shamrock -- a former UFC champion and White's nemesis -- and there is also talk that "The New York Bad Ass" might also get another crack in the Octagon with a decisive win.