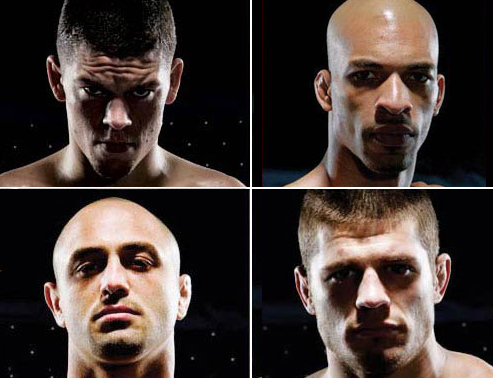 The two remaining quarterfinal matches are set to go and Pulver teammates Nate and Corey face-off followed by Manny and Wiman.

During the opening promo I couldn't help but notice Nate and Wiman punching themselves in the face to get psyched up for their fights and I was convinced that I had finally solved the riddle to Rich Franklin's chronic black eye.

Nate's feeling funny about sharing his personal space with someone he's fighting so he makes an effort to distance himself from Corey at the house and at the gym – including an impromptu training session with Team Penn.

As expected, BJ finds it rather amusing but Jens insouciant gesture leaves me wondering if his "teammates to the end" and "always bleed yellow" speeches were geared towards fighters like Andy and Brandon who may not carry the name recognition that Nate Diaz does.

Before I can spend any additional time dwelling on it we're treated to an Off-Broadway performance of Danny Torrance: Twentysomething. I guess along with the omission of never fighting professionally, Corey also neglected to mention that he has an imaginary friend named Buddy Rowe.

As Corey describes it, "It's like having a couple of extra coaches with you." With that I immediately thought of Corey and Buddy reenacting Mary Stevenson's Footprints in the Sand and I had trouble composing myself for the rest of the segment.

Anyway, Nate vs. Corey is underway and Corey rushes in. Nate ties him up and takes him down. Corey easily gets to his feet. Nate shoots but Corey is having none of it. Nate shoots again and gets stuffed. Corey pushes Nate onto his posterior. Nate gets back up and eats a right hand for his efforts.

Corey throws Nate to the ground. Corey looks immovable. Nate rises and they lock up. Corey shows off his strength by picking Nate up and slamming him down but Nate locks up a guillotine in the process. Corey takes the bait and tries to muscle his way out of it and Nate traps him in a triangle to force the tap.

Despite losing, Corey looked like a much better fighter than he did against Emerson. Jens expects big things out of Corey in as early as six months to a year. I don't disagree with him. On a personal note, I missed hearing BJ yell instructions from outside the cage. It adds something to the fights that I did not expect.

At the weigh-ins for Manny and Wiman, Dana brings up Manny's size and how it's a disadvantage that will probably keep him from getting to the Promised Land. Having watched every season of The Ultimate Fighter, I know this means he's guaranteed to beat Wiman.

The producers are following the standard playbook which of course calls for a misdirection, but a comment like that so close to the fight is like coming home drunk and shouting "I wasn't out drinking" as soon as you walk in the door.

Over at the gym Manny is surprised with a visit from cousin and welterweight contender Karo Parisyan. Manny seems to take it up a notch while Karo's in town and in the interview booth tells us he's going to be in Matt's face for fifteen minutes.

Since it's only a two round fight Manny either anticipates a draw or he plans on ambushing Wiman after the fight ala Diaz/Riggs. Poor math notwithstanding, Manny looks believable when he tells Handsome Matt he'll need a new nickname after the fight.

Round one and Manny rushes in. They tie up and start swinging. Wiman shoots and eventually scores the takedown. Not much action from the top as Manny reverses and lands some blows.

Matt gets to his feet and they exchange. Wiman gets cut above the eye. Nothing serious as the Doc gives him the OK to keep fighting. Manny takes Wiman down and keeps punching. Matt finds his way out but Manny brings him right back down again and lands more shots as time expires.

Manny was busier and more dominant the entire round. Wiman looked like he couldn't get anything going.

Round two starts with a wild exchange until Manny picks Wiman up and slams him. Matt looks bewildered as an aggressive Manny starts punching at will. Referee Herb Dean doesn't like the pace and stands them up.

After a brief exchange Manny shoots but gets nothing. Wiman lands a two-punch combo then shoots but gets stuck against the cage. Manny's working for a kimura. Wiman wiggles and tries to get his back. Matt loses position and Manny's back on top.

Wiman is sucking wind. BJ is screaming at him to continue. Manny is pounding away. Wiman looks close to giving up as his body goes limp from exhaustion. The round ends with Manny having his way with Wiman.

This fight was all Manny. Wiman never looked in it even though he arrogantly tells his teammates in the locker room he's still the better fighter. BJ doesn't agree and doesn't like the fact that Matt was covering his face the entire fight.

BJ's advice: "If you're worried about how your face is going to look you shouldn't be in the UFC because it's gonna get smashed."

The segment ends with Wiman repeatedly calling Manny a "Little Bastard." Now there's a nickname I wouldn't mind hearing from Bruce Buffer in the announcements.

Stay tuned next week as we enter the semifinals, Karo and Nate have to be separated, and Corey Hill continues speaking in tongues.