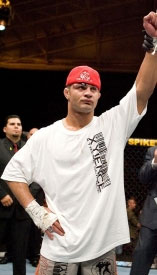 UPDATE: Koscheck issues a new MySpace bulletin and says the statement below was a hack job:

"I AM AWARE OF THE PAGE BEING HACKED AND THE BULLETINS POSTED. THIS WILL BE FIXED ASAP..

TO THE PUSSY WHO HACKED MY PAGE, GET A FUCKIN LIFE!! COME TO MY FACE AND SAY THAT SHIT BITCH!!

"UFC Prez Dana White is always quick to pull out the 'boxing promoters are crooked' line during his frequent discussions about boxing. I would argue that the UFC Czar is just as crooked.

Why did Chuck Liddell and Rampage Jackson only make about $500,000 for their recent UFC 72 showdown. UFC 72 did about 1 million pay per view buys at $40 a pop, Zuffa made 40 million alone in ppv dollars. Not to mention the live gate, over seas viewing rights, and sponsors that ponied up money for this fight. Why do UFC fighters get such a small piece of the pie in a sport that's supposedly on the upswing? With the rise in of popularity of the UFC why aren't their fighters paid MUCH more.

I'm not saying there aren't boxing promoters that don't short change their fighters, but boxers can make alot more money over a career than a UFC fighter can. Shannon Briggs was paid 1.8 million for his meaningless title defense against Sultan Ibragimov last weekend. GO ahead UFC fans, defend your boy Dana White.

Nice try, as demand for the sport builds up so should the fighters salaries. I'm not buying that one. Zuffa is keeping as much as they can of the 100 million they made for UFC 72. They should be ashamed paying two of their top fighters $500,000.

White and the UFC basically want to pay the fighters like a third rate sport but at the same time want to claim to be a legitimate sport. The average UFC fighter doesn't even make a middle class living it is ridiculous. Even the elite MMA fighters are way behind other professional sports.

UFC fans are in serious denial about this issues. They will say things like well athletes shouldn't make that kind of money. Well somebody is making it so why should it all go to the promoters? Or they will say that it takes time but again the revenues MMA is generating is huge so it is a matter of changing the structure not time.

UFC fighters need some kind of union to make a larger share of the pie since it is the fighter that literally rolls the dice with his future health and even his life not the promoters."

Wow. Does Koscheck have a brass set or what?

He makes some great points here ... I just never expected them to come from him in this fashion.

I'm not sure if he's the author, but he apparently agrees with the statements, especially if he's repurposing and sharing them with his MySpace network.

Koscheck is slated to meet Georges St. Pierre at UFC 74 on August 25. The winner of that bout will more than likely challenge for the UFC welterweight title later this year or early next.

Wonder if he will demand a raise.

(For the record Koscheck earned $14,000 for his win over Jeff Joslin at UFC Miramar in December 2006. Fighter paydays and salaries were withheld by the athletic commission in Texas because of privacy concerns. Therefore, his purse for defeating Diego Sanchez at UFC 69 is not a matter of public record.)