Share All sharing options for: UFC 73: Final 'stacked' line up is confirmed 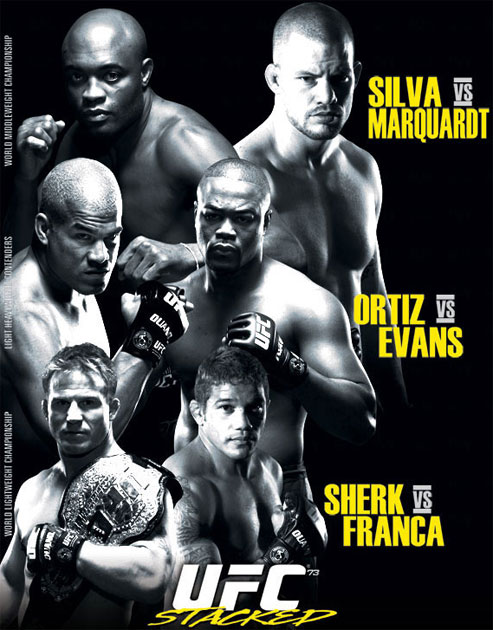 More than one month out, UFC.com recently made one of the most solid cards in recent history from top to bottom official.

Of course, former PRIDE FC heavyweight champion Antonio Rodrigo Nogueira will make his Octagon debut against Heath Herring, which will mark the third time the two have faced one another ("Big Nog" has taken the two previous bouts).

In addition to the 155-pound title fight, there are two other lightweight match ups on this card that should be dynamite. Kenny Florian will go up against the highly touted UFC newcomer Alvin Robinson, and Frank Edgar will look to keep his undefeated UFC record (2-0) against Canadian jiu-jitsu sensation Mark Bocek.

Don't sleep on these fights ... both should be extremely competitive and exciting.

Stephan Bonnar will also return after serving a nine-month suspension for testing positive for banned substances when he faces Mike Nickels in a clash between two 205-pound fighters.

Oh, and by they way, Chris Lytle and Drew Fickett will go to war to see who can inch up a bit closer in a stacked welterweight division.

On paper, this line up is absolutely insane. UFC brass and matchmaker Joe Silva should be commended for putting together a card that should thrill fans from the moment the first preliminary bout begins.

UFC 73: "Stacked" will take place on Saturday, July 7 at the Arco Arena in Sacramento California. To check out the complete UFC 73 fight card click here.

(Remember: Even if UFC 73 is a sell-out crowd — and I can't imagine it won't be — tickets can still be purchased through StubHub.com.)