UFCmania to sponsor Jon Fitch at UFN 10 and beyond

Share All sharing options for: UFCmania to sponsor Jon Fitch at UFN 10 and beyond 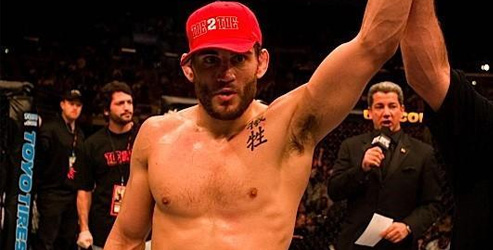 All the clicks and impressions from our readers have finally paid off:

UFCmania is proud to announce that we will sponsor UFC welterweight fighter Jon Fitch in his upcoming bout with Roan Carneiro at UFC Fight Night 10 on June 12.

In addition, we will continue our support for at least two more fights thereafter, and hopefully even more beyond that.

If you've ever visited this site with any frequency, it's clear that we are unabashed Fitch fans. He's one of the top talents in the 170-pound division that no one knows much about.

It's our goal to help change that — no matter how small our contribution.

In addition to being a great fighter, Jon is also someone I know on somewhat of a personal level. In fact, we were recently dual bestmen at a mutual friend's wedding.

Fitch knew him from wrestling at Purdue, and I happened to grow up with him.

So not only are we sponsoring someone who we think is the best kept secret in the UFC, but also someone who is pretty damn chill.

This is something we've been tossing around for sometime now, and it was important for us to partner with not just any fighter. Thanks to your continued support, we were able to nail down a pretty big name that can contend for the title as soon as he's given the chance.

I just want to point out that we don't get paid to run this site. We're reinvesting all the money we make on UFCmania back into the Web site so we can do some pretty cool things.

Our sponsorship of Fitch is just the beginning of hopefully great things to come.

Fitch is a pretty busy guy — in addition to training he also works part-time. We'll do our best to get some exclusive updates from him throughout his training for Carneiro to pass along to UFCmania readers.

If you're unfamiliar with Fitch -- and astonishingly some people are -- check out his MySpace page, as well as his official Web site.

In addition, since Fitch is fighting in Florida — and we're located less than an hour from the speculated venue in Hollywood — we're looking to put together pretty sick UFC Fight Night 10 afterparty.

Stick around for more details.

In the meantime, I just want to say thanks again to all our loyal readers. And best of luck to Fitch on June 12 — it should be a good one.

(Especially since our logo will be on his shorts for literally millions of Spike TV and UFC fans to see ;).)