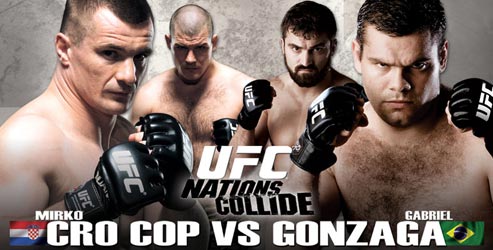 We're less than a few hours from the start of UFC 70: "Nations Collide," which will begin at about 12:45 p.m. EST from the Manchester Evening News (M.E.N) arena Manchester, England.

The main card and main event, which features the heavyweight showdown between Mirko "Cro Cop" Filipovic and Gabriel Gonzaga, will air via tape delay for free on Spike television at 9 p.m.

It's important to note that the show will be broadcast at 9 p.m. on both coasts, according to Dave Doyle at FOXSports.com.

"Something for people on the West Coast to keep in mind on Saturday: Spike TV has split feeds for the East Coast and West Coast. So that means both the East and West Coasts will be getting the show at 9 p.m. local time tomorrow, it is NOT 9PM Eastern/6 Pacific. DirecTV carries both feeds, so if you have a dish, you're in luck."

We'll begin to post the LIVE results soon -- all you have to do is click the jump at the bottom of the page.

These are potential spoilers, especially if you plan to watch the show this evening. Therefore, DO NOT click the link below if you don't want to know who won the fights until later tonight.

In addition, I suggest not clicking on the comments section in any of the posts because there might be readers who are talking about the results.

We also plan to post the tape-delayed results -- with commentary -- later on this evening for the folks who can wait for the broadcast.

That's it ... enjoy the show and don't forget to stop by and share your thoughts on the action here at UFCmania.

Here are the quick UFC 70 results:

(Don't forget to REFRESH the page for the latest results).