Share All sharing options for: Tito to Dana: 'Keep your mouth shut' 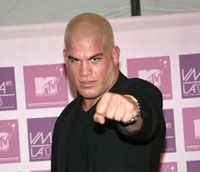 "The Huntington Beach Bad Boy" today launched his latest salvo regarding the phantom three-round boxing exhibition via a press release.

"Dana White has once again taken the low road and decided to try to damage my reputation and credibility in a public forum. During an appearance on Spike TV on April 12th White accused me of failure to show up for a fight we had originally scheduled for March 24th. He did so at the end of the program and gave me no opportunity to respond or tell the real story, which is simply this: White was fully informed well in advance of March 24th that I would not fight without a contract, which White refused to sign.

Fighting is my livelihood and jeopardizing my body without a full understanding of conditions, doesn't make any sense. No professional fighter will go into a risky match without a contract.

I've struggled to get respect and dignity for my profession and I do it in the way I lead my life as a fighter and as a human being. Dana's attitude not only disrespects me, but all fighters. I am taking this stand just not for this one incident, but for all future champions.

I want to reiterate: I am ready to settle my differences with Dana White in any fighting forum we can agree on, but only if there is a signed contract that stipulates where the money is going, whether it is to charity or to the fighters doesn't matter as much as having a definitive agreement.

Until Dana White is ready to fight me on a professional basis, I strongly urge him to keep his mouth shut."

I beg someone to please tell me — PLEASE — when this is going to end.

The fallout has already angered so many fans and readers here — the back-and-forth in the media is only going to stoke those flames.

Hopefully, Tito also follows his own advice and keeps quiet himself ... for the love of God.