Sports Illustrated: 'A day in the life of Chuck Liddell'

Share All sharing options for: Sports Illustrated: 'A day in the life of Chuck Liddell'

UFC Light Heavyweight Champion Chuck Liddell graced the pages of Sports Illustrated last week, revealing the archaic training methods that have turned him into one of the top -- and most feared -- mixed martial artists on the planet.

"The Iceman," of course, trains with John Hackleman at "The Pit" in California. And Liddell has been with him for the past 16 years.

I guess if it ain't broke, don't fix it.

There's a ton of interesting stuff in the article -- more so in the print version that is on newstands now. 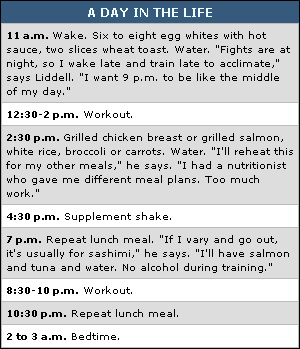 His training habits -- like his trainer -- are unconventional. I'm not sure how many other UFC fighters call it quits at 3 a.m and train for just three hours each day.

Currently, he's in the process of preparing for Quinton "Rampage" Jackson at UFC 71 on May 26. It'll be Liddell's first fight of the year since defeating Tito Ortiz at UFC 66 on December 30, 2006.

Believe it or not ... that insane showdown is only six weeks from this Saturday.